Phoenix Suns vs Los Angeles Clippers: Can at least two out of Bledsoe, Morris, or Jackson get going? 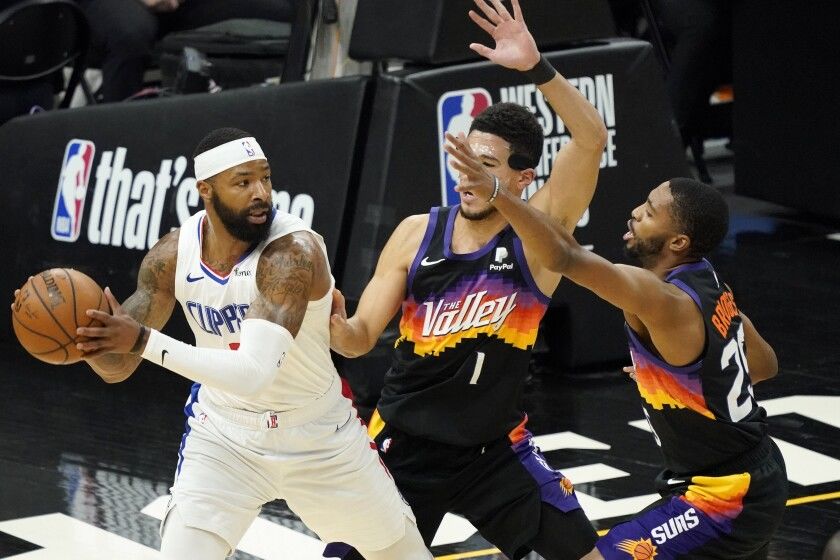 COVID-19 and injuries both keep giggling at the team schemes and have proven to be a big deterrent once again. This combination of the two has plagued almost all squads by now but ironically, despite the Omicron case count rising in the USA, the league has seen lesser postponements compared to the earlier surge of the variant. Anyway, let us jump to this contest between the Phoenix Suns and the Los Angeles Clippers. The Suns have 29 wins and eight losses meanwhile the Clippers have won half of their 38 games. The Suns have been hovering with the best record along with the Warriors since December. Here they will face a Clippers squad without two of its main players in Leonard and George. Can the Clippers pull off an upset away from home? For my game and total prediction, jump to “Expert Betting Tips”.

Suns’ current composition: With Booker and Paul, the team can create a ton of problems for the opposition's defenses. While Booker is a regular 20+ points scorer, Paul distributes the ball at an elite rate, handing over 10-15 assists a game regularly, both winning numbers indeed. Meanwhile, wings Cameron Johnson and Mikal Bridges have been scoring around 15 points on a regular basis. Jalen Smith has emerged as a terrific option at the big Forward, hoarding rebounds and scoring inside at a high clip. Regular back-up Cameron Payne provides both scoring and assists, while Bismack Biyombo has been a terrific back-up Center with his high-quality finishes and rebounding. Overall, the Suns have a lot of weapons to deploy at both ends of the floor.

Clippers issues: Marcus Morris has been the most reliable option on the offensive end with George out, who can score 20 or more on a consistent clip. Reggie Jackson and Eric Bledsoe are both experienced guards whereas the Clippers need more out of Mann, who can be a big weapon if he scores 15+ more consistently. Ibaka has shown some offensive hops despite seeing a decline in his production. Justise Winslow, Xavier Moon, and Amir Coffey can provide decent filler minutes but still I think the large offensive output depends upon Morris, Jackson, Bledsoe, Ibaka, and Mann here. The Clippers can have some defensive issues and the Suns can run over them with their highly disciplined offense.

Points Range: Suns have scored 123 or more in the last two games and that is not a surprise considering Booker and Paul are at the helm here. Meanwhile, the Clippers have scored 108 or more in two of three games, including a 120 points outing against the Nets. Defensively, the Suns are a high-quality squad who have allowed 99 or lesser in two of the four games. Clippers have a so-so defensive unit right now but I believe they can be better on that end, overall, they have allowed 116 or more in three games straight. This means that a lot of points can be scored by the Suns here. I believe they will breach the 115 points mark here while I believe the Clippers will go past at least 105. The overall total points range seems to be 221-231.

Prediction: The Suns have been on fire all season long while the Clippers have struggled to piece together wins especially since Paul George has gone missing from the fray. With Booker, Paul, Bridges, Smith, Johnson, Payne, and Biyombo, the Suns have shown that they are a force on the offensive end and well, it will not be a surprise if they destroy the Clippers defense. I do believe the Clippers will keep it close till the third quarter but an early fourth quarter run by the Suns may put the game away. I believe the Suns will take this 116:106.