Sacramento Kings vs Miami Heat: Heat is a handful on both ends 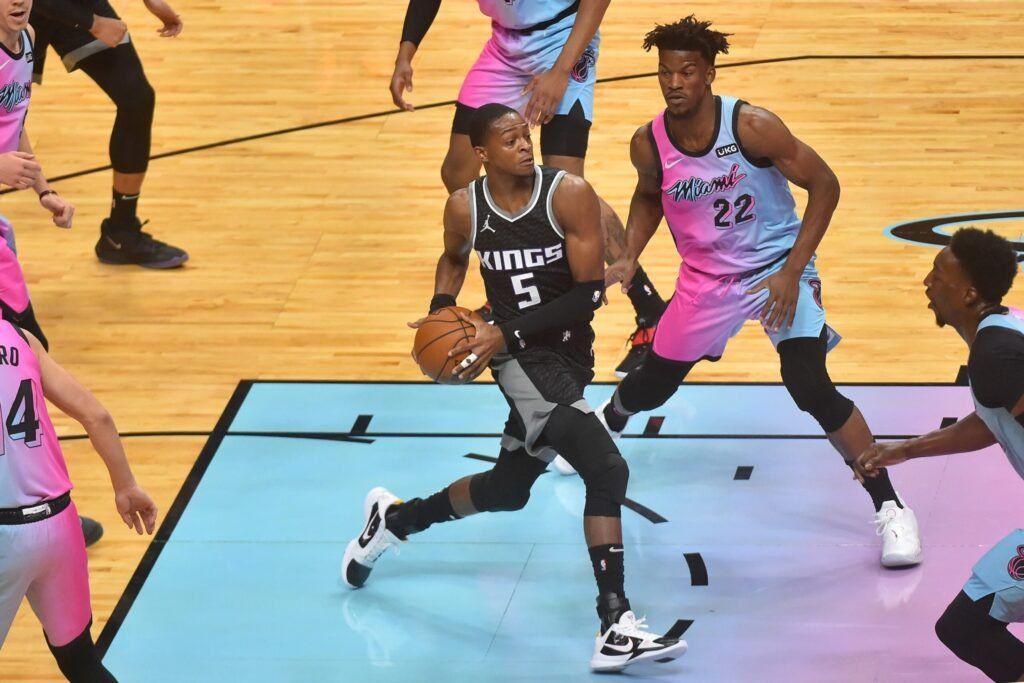 COVID-19 has engulfed campaigns after campaigns but even then certain teams have kept their ships afloat courtesy of some well-built depth. One of those teams in that case, the Miami Heat will take on a team that doesn’t have the depth even when they are healthy in Sacramento Kings. Heat has found success even without Adebayo and Butler, and the signing of Kyle Lowry makes sense with every day. Heat has won five games in a row and one of their games got postponed. Meanwhile, the Kings lost their last game in an underwhelming fashion against the Dallas Mavericks. The Heat has been stellar all season long, the Kings not so much… Can Heat catch another team napping with their ace Jimmy Butler back in the mix?

Heat’s ace is back: Jimmy Butler missed weeks of action due to an injury but he has shown a lot of everything since he has been. His exploits? He scored 37 in the last game and a game before that, he led the team in assists with 12, during one of the games, he had 11 rebounds and that is why I said he has shown a lot of talent in different spheres and of course, his defense is usually top-notch. Apart from Butler, Herro remains a scoring threat of highest level but the sweetest surprise for Miami has been the play of Omer Yurtseven, who has compiled three straight double-doubles and has grabbed at least 12 rebounds in each of the last seven games. This has been a big boost with both Centers in Dedmon and Adebayo missing in action. The Heat has certain effective role players and their contributions have helped the team forge an impressive record.

Kings can get overwhelmed: The most frustrating part of being a Kings fan is the manner in which they have lost their games, often getting down by as big as 20 and losing all semblance on both ends of the floor. Ah, how hard must it be for the fans to see the same old results for more than a decade or so. The Kings have lost all grip over their fortunes and keep on turning over games on a regular basis. Despite having a versatile four-guard rotation, there are times when individual performances are there but as a team, there is a lack of combined efforts. With Barnes’ production receding each month, the going has become even more tough. The team has a lot of talent but it is just that it is one of the cases where it doesn’t come together.

Points Range: Kings are not among the premier offensive teams and with Buddy Hield struggling to score at an efficient rate, the team has been reeling at that end way too much. The Heat is a much more efficient offensive team and even if some of their options go cold, they have a lot of tools in their bag to eke out big-time offensive nights. Heat has scored 115 or more in four of the last five games, including two 120+ nights. This is why you can’t afford to go cold against Miami, because their offense can help them mount a substantial effort. On the other hand, Kings have scored 102 or less in five of the last five games, and have been held under 100 way too many times this season. Teams have scored 110+ consistently against the Kings so they are vulnerable at both ends. I think the Heat has a chance of scoring 115+ here and although I said in the last game that the Kings will get around 110(they only got 96), I think they have the lineup to do so. The Total Points Range here seems to be 222-232.

Prediction: This is a big-time game for the Heat who has won five in a row and it is clear that the team will be the favourite to win again especially against a struggling team in the Kings who are terrible both at home and away from home. For me, the Heat is not only deep but has more confidence. I think the team has a 62% chance of winning here and I believe them to take this with a score of around 119:107.