Toronto Raptors vs Boston Celtics: Will the Cetlics be able to win without Tatum as they take on the loaded Raptors? 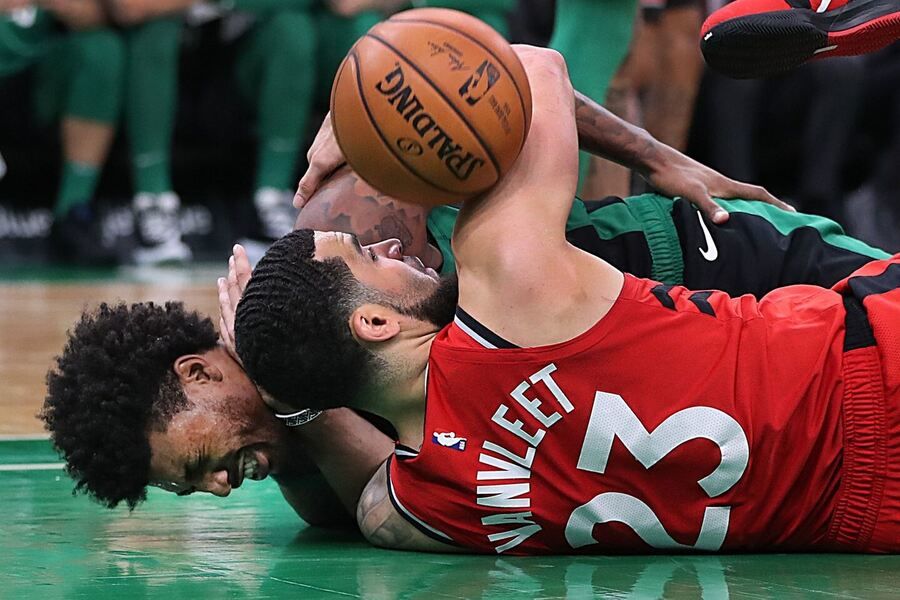 The NBA Playoffs are not far away from this and surely the excitement raises to the highest point when the postseason is in full flow. However, the current window is no less than a Playoffs one and teams are wrestling to solidify their spots. The top-two spots in the Western Conference are pretty much seized by the Phoenix Suns and the Memphis Grizzlies. In the East, the picture is much trickier and we are still due to see the favorite for the top spot. However, the Boston Celtics are laying their claim each day on the top spot while the team they take on the Toronto Raptors have their work cut out.

The Raptors have been covering a lot of ground

The Raptors are in full flow these days and they have staked the claim to finish in the top six standings. Pascal Siakam and Scottie Barnes have to be one of the best two-way frontcourt duos and both of them keep on filling the statsheet. One interesting aspect has been the play of Chris Boucher and Precious Achiuwa. Chris has been a huge menace on the defensive end and alongside Precious, form one of the best rebounding duos off the bench. The Raptors have to be one of the most athletic teams in the league and their pressure at the perimeter and inside both are equally impressive.

OG Anunoby’s return further bolsters the defense and the team has won a ton of games when he is in the lineup. While the duo of Gary Trent Jr. and Fred Van Vleet is hurt these days, the dribbling abilities of the frontline players like Barnes, Anunoby, and Siakam have bailed the team out. The Raptors can be much better at the home floor after they have been phenomenal away from home and if they improve their record in that regard, they can go further up. Most of the games the Raptors will play are at their home floor, and I must say, you gotta watch out for the Raptors’ length and athleticism, it has been pressurising even elite teams.

The Celtics have been making mockery of the rest of the league. It is not just the wins but it is the manner of the wins that has been the key thing. The last six three victories have been by 22, 28, 11, 20, 29, and 22 points and this implies that the team barely gives a chance to the opponents. Not only have they have the best defence in the league since February, their offense is also reaching elite status. Another reason for the near 90% win record since February(only rivaled by league’s best Suns) has been the team’s dominating performances away from home and when you carry such momentum into the home games, the wins are of course going to follow.

The lineup of Smart, Brown, Tatum, Horford, Robert Williams, White, and Grant Williams contain terrific individual defenders, and the team knows when to switch with even the guards able to take on much taller wings and bigs. The defense knows how to shut down the ace of the opposition and they have been doing a brilliant job of also forcing turnovers while keeping the perimeter shooting down by a bunch. Not many teams even close to their season scoring averages when going up against the fired-up Celtics. And combine that with an elite offense and even the Suns must be wary of this squad. Tatum is the ace but Brown and Smart have been also playing well while Williams and Horford are opportunistic scorers with Williams also producing offensive rebounds on a regular basis.

Points Range: The Celtics have been the best defensive team in the league but without Robert Williams III their defense can be weakened. The Raptors have a strong frontline and thus Pascal Siakam can get more driving and shooting lanes with Robert being out. With Tatum also potentially sitting out for the Celtics, the Celtics will be hurt on both ends of the floor. However, one can’t overlook the unit of Brown, Smart, White, and Williams that can pose a threat but the Celtics will still be a weakened unit. The Raptors can also be hurt without Van Vleet and Trent Jr. as they are the major ball handlers and pressure defenders at the perimeter. But the team has recently shown that they can hang on without these two. I believe this will be a grueling battle overall with the points range in 210-220.

Prediction: The Celtics played last night and destroyed the Timberwolves lineup. However, the Raptors play a much more physical brand of basketball and I believe they match up well against the ruggedness of the Celtics. Siakam and Barnes have both learned how to be effective even without the major Guards playing for the team while OG Anunoby surely brings the edge on both ends of the floor. The Celtics will play their second game on the second night and I believe the Raptors will exploit that fact and take a 110:105 win here.