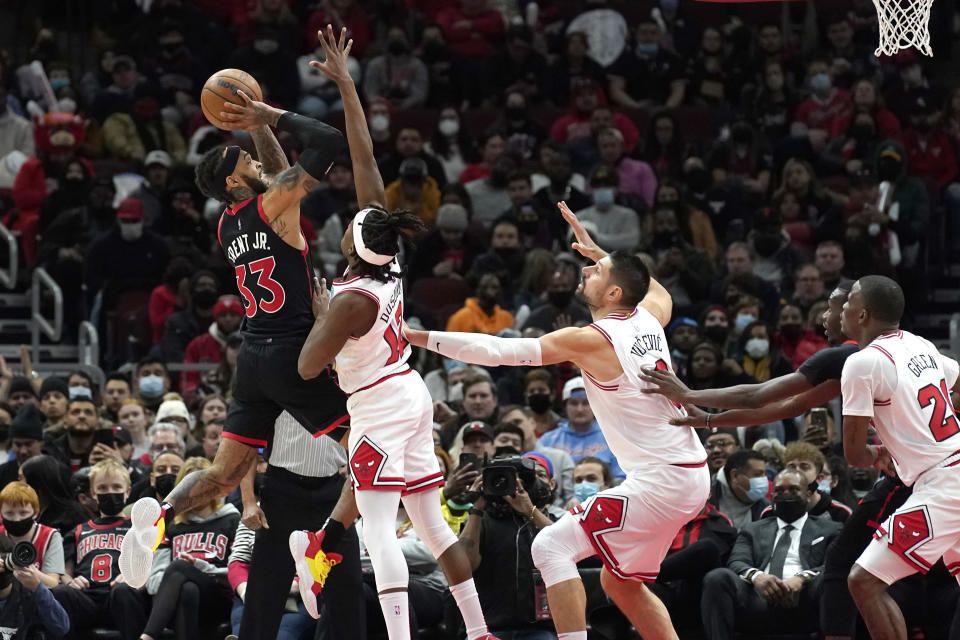 Eastern Conference has become deep this season and there are various contenders for the NBA Finals this time around. Many squads have got a supply of big-time players this season and this is a great sign for the league as it means increased quality. Squads like Sixers, Bucks, and Hawks who were the contender for the Finals last season will find it tougher this season as the Conference has heated up and two of the teams who will meet here in the Toronto Raptors and Chicago Bulls have risen to new heights this season, looking to ramp it up with each month.

Raptors have lodged 26 wins and 23 losses, playing it close mostly but a host of all-around players mean that they have been clicking on both ends, especially the defensive end. The Raptors have won three in a row, all against tough squads, and have lodged five wins in the last seven games, and after they had a high-octane January, this month they will look to capitalize upon the gains. On the other hand, the Chicago Bulls have lodged 32 wins and have just 18 losses, a significant uptick compared to last season and after a tough month of January, they have notched wins in four of the last five games, playing at a high rate recently. Bulls have a strong pairing of LaVine and DeRozan, one of the most formidable duos this season. Chicago will look to build further but yes, with Ball and Caruso out, their Point Guard depth has taken a significant depth. Will the Raptors win four in a row and keep strong squads at bay against this month? For my game total and result prediction, jump to “Expert Betting Tips”.

Raptors have been clicking, Bulls have lofty dreams

Toronto has been fighting hard these days and since January they have been one of the best defensive units in the league too. Raptors make you play hard on the offensive end because they have both size and athleticism, and so many hustle players that it makes it hard to compile big runs. One of the issues earlier was that the team was unable to sustain the rhythm but a six-game winning streak early in January has brought them back to track. The Raptors will need to capitalize upon their current run and if they do, they can aim for a deep postseason run.

The Raptors seem to be the winner of the last season's trade between Gary Trent Jr. and Norman Powell. Gary has scored 30+ in the last five games and this has been one of the biggest reasons for their wins. When Gary was injured, the Raptors lost more than 75% of their games and for a team that doesn’t have a deep bench, a scorer like Gary is a big boon. Rookie Scottie Barnes had made a huge difference as the hustle and defensive player, and surely, his inclusion in the squad has made the Raptors a better team. Fred Van Vleet is a two-way guard who even with his current shooting woes, plays a crucial role in the overall scheme. OG Anunoby and Pascal Siakam are both terrific two-way players and if the bench for the Raptors were stronger, I am sure they would have crossed the 30 wins mark. Boucher and Achiuwa form a strong depth in the frontcourt with their rugged play but the bench has no sustainable guard and wing depth.

Bulls are back on track

Chicago was significantly hit with injuries in the mid-January window. They had a tough time last month largely due to the absence of first Ball and Caruso coupled with LaVine’s injury. However, since LaVine has been back, the Bulls have pulled through in most games and after a period of 70%+ losses, the team has won four of their last five games, taking advantage of the offense produced by the tandem of LaVine and DeRozan. Do remember that the Bulls are still at the top of the Eastern Conference and once Ball returns, they will look even more formidable.

One big plus for the Bulls has been the play of rookie Ayu Dosunmu who has dished a bunch of assists and has given the team an additional option with the two main PGs out. Vucevic is a big-time rebounder and his offensive production has been consistent too. JaVonte Green’s return has been big too and his ability to hustle and rebound has been big recently. Coby White gives a scoring punch off the bench but the bench of the Bulls is weak these days at most positions with the balance compromised due to multiple absentees.

Points Range: Raptors have scored 110 or more in four of the last five games and their offense has much improved since the mid-January window. These offensive fruits have been sown by Gary Trent Jr., whose big-time production has helped the Raptors overcome the bench-related deficiencies. On the other hand, the Bulls have compiled 122 or more in the last three games and that is not a surprise considering the hot offensive streak of both DeRozan and LaVine, backed by high-yielding Vucevic.

Defensively, I have no doubt that the Raptors are better than the Bulls, with their hustle and disciplined effort over long periods. The Raptors usually hold teams around the 106 points mark. On the other hand, the Bulls have conceded 115 or more in the last three games. The last contest between these two teams brought in 216 points with the Bulls scoring 111 but I feel the Raptors will limit the Bulls below 110. I think the overall points range here is 210-220.

Prediction: The Bulls beat the Raptors 111:105 during the last meeting as stated above. In that game, the Bulls poured in 67 points in the first half and the Raptors usually don’t concede in one half alone. However, that was a home game for the Bulls and the Raptors will be dialed in during this home game. I think the Raptors will choke the Bulls' offense in the middle of the first half here and then keep it tight to close the game while the Bulls will have a tough time from beyond the arc. I also believe that Fred Van Vleet and OG Anunoby will have a strong game here while Gary will keep on pouring heat. I see the Raptors taking this game 112:105.