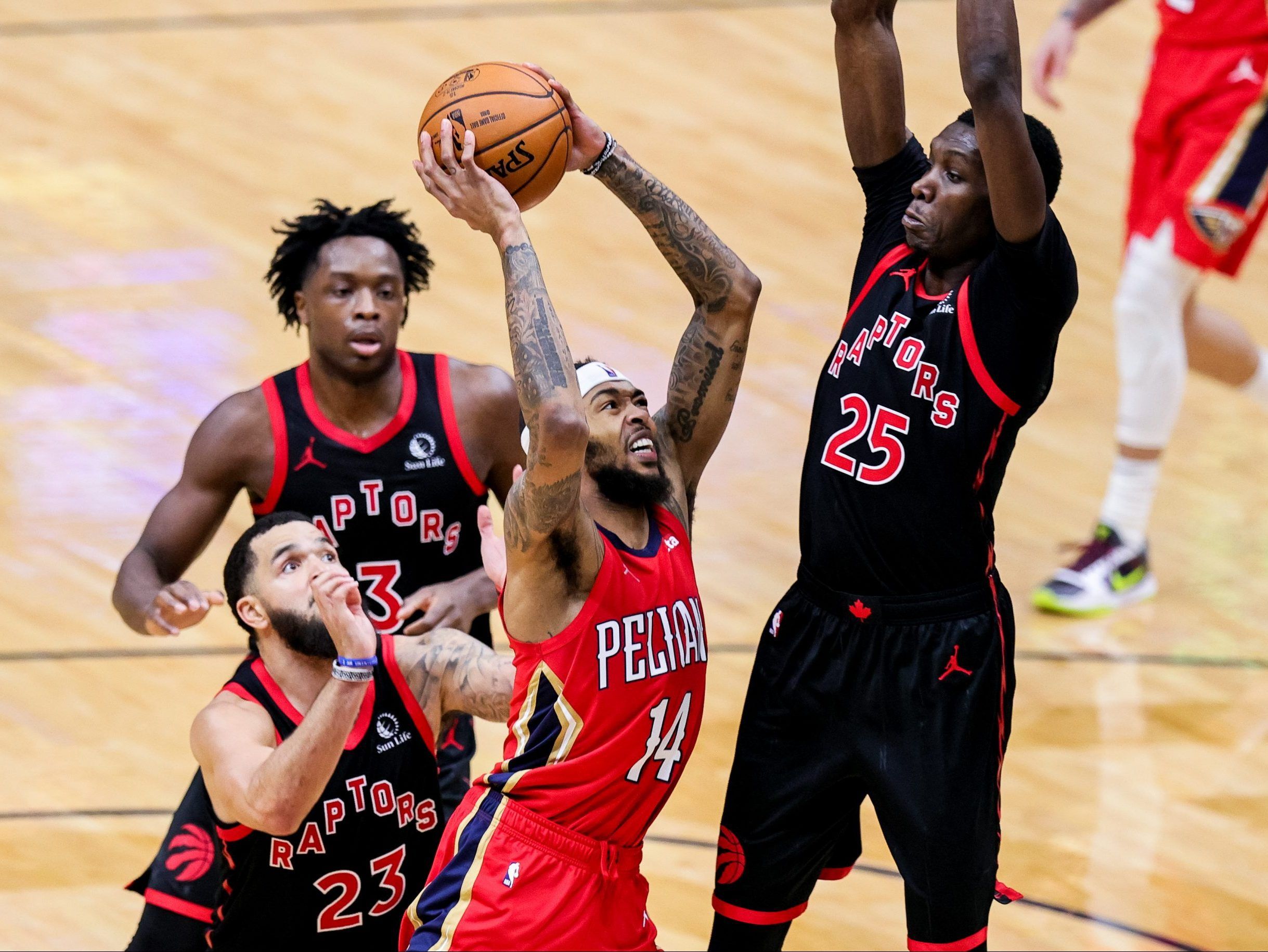 COVID-19 has destroyed the fabric of the world and the way we look at things. So, has the NBA’s fabric been ripped apart but the league has shown a flexible approach trying to sewing it all back. Anyway, let us jump into this game straightaway. Here, the Toronto Raptors will meet the New Orleans Pelicans in an East-West battle. The Raptors have 19 wins and 17 losses, winning five games in a row, meanwhile, the Pelicans have 14 wins and 25 losses, coming after a win but losing three in a row before that. The Raptors are having a healthier unit after a long time and have been playing their best basketball on both ends and meanwhile, the Pelicans are playing without their young superstar Zion Williamson and heavily dependent upon Ingram and Valanciunas. Can the Raptors nab their sixth win in a row or will Pelicans eke one out a long way away from home? For recent team and player stats, jump to “Team and Player Performances”. To know my total and game result prediction, jump to “Expert Betting Tips”.

Raptors have a sturdy unit: When I look at the Raptors roster, two things jump out. First, their length and athleticism, secondly, their evenly balanced lineup with clarity of roles. But more than these two factors, it has been the otherworldly form of Fred Van Vleet who is having the best stretch of his NBA career. The feisty guard has sunk 31 or more points in four of the five games and has made a strong case for the All-Star team. Along with his scoring exploits, the guard has continually dished 5 or more assists and has effected a ton of turnovers while not turning the ball over himself that much, really when you score 30+, dish 5+ assists, and commit just 0-2 turnovers, that has to be lauded. With a fit-again Anunoby, who forms a formidable pairing at Forward with Siakam and Barnes, the Raptors have three all-around players in the lineup. Gary Trent has been struggling recently but the rest of the team has covered well for the young un!

Pelicans have fought: Pelicans made things tough for them when they began the season with a paltry one win and 12 losses record. Compared to that, they have won 13 games and have lost 13, which is of course miles ahead. This was coming as they are missing their franchise player in Zion Williamson. Still, with Brandon Ingram continuing as an offensive force, Valanciunas battling on boards and scoring well, along with an all-around talent in Josh Hart, a perimeter threat in Devonte Graham and a highly promising and steadily improving rookie in Herbert Jones, along with a scorer in Nickeill Alexander-Walker, Pelicans can surprise even on-song team. Their bench is holding them back big-time and if the bench were chipping in more often, I guess they’d have garnered 3-4 more wins at least.

Points Range: Pelicans have been decent on offense, scoring 108 or more in three of the last five games but that is nowhere near what the Raptors have produced during recent games. The Raptors have played their best stretch of offense since late December, piling up 116 or more in five games straight, including three 120 or more points outings. On the other hand, they have allowed mostly 105-108 points and you can see how they have won five in a row. For the Pelicans, their defense has been terrible during most games and they have leaked 115 or more in four of the last six games, including two 120+ nights by oppositions. It is clear who has been faring better on both ends of the floor and playing at home, the Raptors have not allowed any team to go past 108 in the last four instances. I think the Raptors will score 115 or more here as well while the Pelicans will have 104+ points game. The Points Range here looks 223-233 to me.

Prediction: At home, on a five-game winning streak against an up-and-down opponent, the Raptors will have their tails up here. Toronto has been expert at taking care of business against below 50% win teams these days and again, they will enter the game with a significant advantage. For the Pelicans, they will need a big night from Devonte Graham and Nickeill Alexander-Walker with no Hart in the fray. Meanwhile, their hands will be full against Van Vleet and again with Hart gone, there will be lesser perimeter defensive bodies to take care of him. OG Anunoby, Siakam, and Barnes can’t be taken lightly. However, I feel it will be Gary Trent Jr. who will leave his cold shooting stretch behind and come up with a big night, dropping 18 or more. I see the Raptors taking this 121:107. I think the Raptors have a 87% chance of winning this game. For a safe bet, I’d take the Raptors to score over 114.5.