Toronto Raptors vs New York Knicks: Which team will right the ship first, if at all? 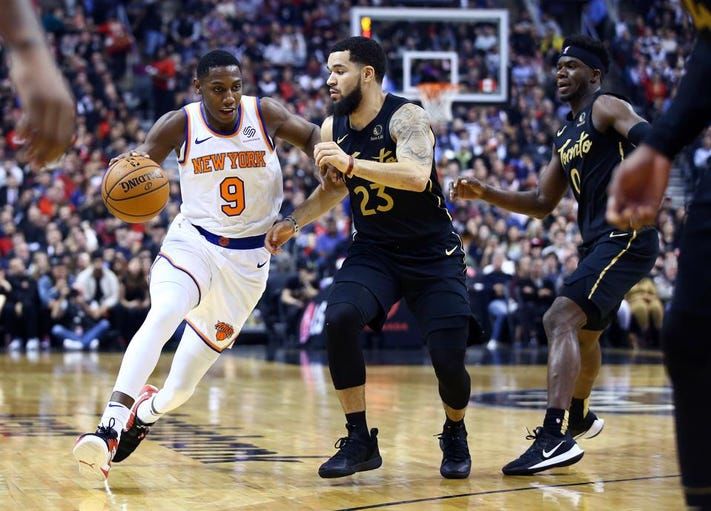 Do you bet? Why do you bet? How do you bet? Do you use deep analysis, rely on just odds, or use your gut, or is there any other method attached to your approach? When you bet, how confident are you? These are some of the questions I wonder about quite a lot these days because as someone who gives suggestions, I have learned how difficult it is to predict NBA games. And it can’t get trickier when two inconsistent teams in Raptors and Knicks meet up against each other. Raptors are three games under the 50% win mark while the Knicks are a game under the mark. Will all of the season be like this for both the teams? For a quick look, go through “Notes”. For “Total” prediction, go to “Expert Betting Tips”.

Raptors offensive struggles: Toronto has three superb scorers in the starting line-up, Gary Trent Jr, Fred Van Vleet, and Pascal Siakam can score in the 18-26 points range but then the trouble starts for Toronto when it comes to other players. The bench scoring for Toronto is in dearth and there is no go-to-scorer off the bench who can keep the offensive flow going. There are times when the combined production of the bench is just 10-15 points, and that is why the Raptors have scored just 91-97 points during many games recently. Will Toronto make some moves to bolster the bench scoring? One thing is for sure if you shot down any one among Gary, Fred, and Pascal, ti can create ruptures in the Raptors’ offensive schemes.

Up-and-down Knicks offense: Knicks have scored 110-121 points in three of the last five games. RJ Barrett has scored 19 or more in the last two. Julius Randle can bag 18-24 points regularly, Evan Fournier 14-18 while Burks and Rose can combine for 24-28 points. The Knicks have tools to score but the trouble is that when their defense is clicking, their offense and when their offense, their defense is shut off. Last season, the Knicks did play a slower brand of basketball but they were more successful, because they had built an identity of playing games in the 95-105 points range, this year they lack any form of identity.

Raptors’ defense: Raptors have played some decent defense lately. In the last five games, the team has not allowed more than 110 points and has kept teams between 90-98 points too. The Toronto team has athletic players and can play some wonderful defense now and then, but that hasn’t been the theme of the season for the Raps. What needs to change? Perhaps more offensive production will bolster the defensive end, isn’t that the case many times?

Knicks defense: Let us go back to last season, the Knicks allowed the least amount of points and held teams under 100 quite a bit. However, recently, the team has allowed opponents to rack up 112-122 points and the defense doesn’t present the same outlook. The Knicks have ended up playing a bunch of high scorers recently and in most of the cases, they haven’t been able to come through. Is this team in need of some elite perimeter defenders and perhaps, they can get one in a deal when they trade Kemba Walker?

Points Range: Raptors have had major issues scoring the ball recently and their most of the games in the last week or so have been under 220 points range. Toronto has scoring chops but not scoring depth. For the Knicks, the scoring has been much better than Mid-November or so as they have gone as high as 115 points but I doubt a 225-235 points range is preferable for them. I think the Raptors defense will be tight in this game and they will hold New York within 105. I pick Raptors to dip in over 100 here too. My points range prediction is 200-212.

Prediction: I pick the Raptors to bag this one despite New York being healthier. I believe Pascal Siakam and Fred VanVleet will combine for a big game here while Gary Trent will also continue his impressive offensive season. I believe the Knicks will struggle in this game on the offensive end. I select the Toronto Raptors to win with a scoreline of 105:97.