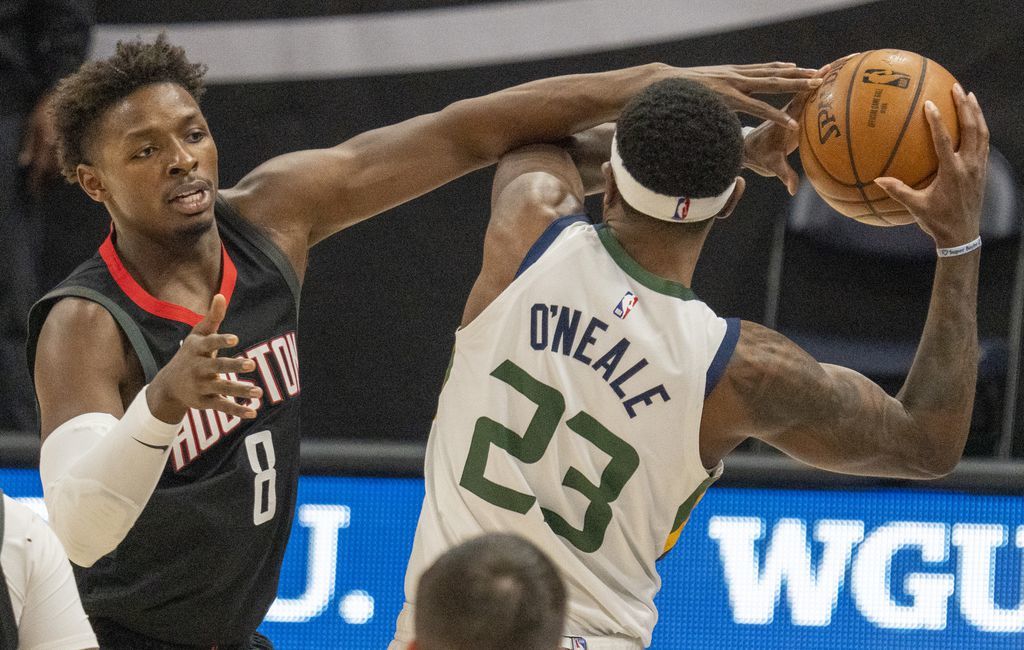 NBA has continued to roll out high-quality games and as we near the All-Star Break, a large number of players will look for much-needed rest as the body undergoes thorough burnout by now. These athletes work very hard at their craft, even if the player is in the G-League, developing the game. The NBA schedule is a grind and as the postseason will close in, teams will have to look for ways to counter the injuries list and various spheres that shape up the league. And when these dynamics are involved, the NBA betting scenario is as tricky as it gets, with exhaustion, injuries, and player form impacting the overall scenery. Keeping that in mind, let us talk about the game between the Utah Jazz and the Houston Rockets.

The Jazz is back! The team is rolling once again after a forgettable January and the engine is revving for the high-octane squad. Utah has won five games in a row and for the season, the Mitchell-led squad has won 35 games and just has 21 losses despite a tumultuous January period. The Jazz has fixed the defensive woes and since Donovan has been, there is much cohesion on both ends of the floor. Hassan Whiteside has stepped his game and has played an immense role in fixing the ship.

On the other hand, the Rockets have been losing throughout the season and are in the midst of a four-game losing streak. They have lost 40 and just have 15 wins, continuing to lose their way on the defensive end. Youngster Kevin Porter Jr. has shown immense improvements since January and his high level of play has been crucial for the flailing squad. Christian Wood leads the team in rebounds and scoring, while also providing a more than decent defensive output. The team did acquire Dennis Schroeder to bolster the one-guard position but the Rockets are clearly lottery-bound. Can the Rockets put on a fight against a revved-up Jazz squad? For my game total and result prediction, go to “Expert Betting Tips”. For my player-based statistics prediction, jump to “Player Performance Prediction”.

Newfound energy for the Jazz

The Jazz had a period where they lost around 80% of their games as both Rudy Gobert and Donovan Mitchell remained out of the squad. With Mitchell back, the Jazz offense has shown adequate improvements and with the way things are going, the Jazz will look to mount up a big run and seize at least a top-four spot in the Western Conference so that they at least have the Home Court advantage till the First Round post the Play-in tournament. Without Gobert, the team has adjusted well on the defensive end, thanks to largely Hassan Whiteside and also Udoka Azubuike, both filling in well to clasp rebounds, play defense, and also score inside buckets, a role major associated with Rudy Gobert.

Donovan Mitchell has upped his defense, rebounding, and has also had passed around the ball well. Bojan Bogdanovic has been doing well but at times, he is susceptible to cold shooting nights but his presence keeps defenders engaged. The most impressive player has been Hassan Whiteside as of late, who has looped in rebounds at a high rate (as high as Gobert) while also rejecting shots and also giving quality inside scoring. Mike Conley has done well in terms of playmaking and scoring and well he provides a great experience at the one-guard position. Royce O’Neale continues to be a difference-maker on the defensive end while Jordan Clarkson despite his flailing three-point shooting can score in numerous ways. Udoka Azubuike has done well in terms of scoring and rebounding as well. Once Rudy Gobert returns, he will be returning to a highly motivated squad.

Rockets have been losing a lot but there is a promise

Many writers thought the Rockets will trade away veteran off-guard Eric Gordon and the two-way Center Christian Wood during the trade deadline and there is no doubt that there are multiple teams that can use their services. Wood has led the Rockets in scoring and rebounding during most games while his defense has been on-point during many instances. Gordon is a veteran guard who has had another decent season scoring-wise but the Rockets will finish the season with these two valuable players, however, the focus must shift on Kevin Porter Jr.

He has done a brilliant job of improving both his efficiency and frequency scoring-wise as well as being the leading playmaker for the Rockets. Jalen Green has been incredible in his rookie year but he is a long long way to develop on both ends of the floor. Jae’Sean Tate is a quality two-way wing while Garrison Mathews has been having a more than decent impact in terms of shooting the ball. Having Dennis Schroeder will certainly bolster the guard depth but overall, the team is heading to the lottery and perhaps may lay their sights on a dynamic wing or Forward while also leveraging for an improved roster by dangling around the picks. A very important offseason is coming for the Houston Rockets as they build after the James Harden era.

Assuming they are available, these are my player-based prediction:

Points Range: The Jazz has scored 111 or more in four games straight and I see them improving further on the offensive end in the upcoming window, having some games beyond the 120 points mark. Defensively, the Jazz has been highly impressive lately, limiting opponents to 104 or fewer points in the last five games. This has been the best window defensively for the team and a huge boost in absence of Rudy Gobert.

The Rockets have usually scored around 106 points recently and there is a huge room for improvement on that end. Defensively, the Rockets are among the more vulnerable defensive squads and can end up conceding 120+ during many games. I see the Jazz exploiting the defensive lapses of the Rockets and scoring at least 120 while the Rockets are going to be limited under 107. I think the total points range here is 220-230.

Prediction: Christian Wood can pose problems for the Jazz defense but the team has been working their tails off on that end recently. I see Donovan Mitchell will come up with a strong offensive game here while Bojan Bogdanovic also dialing on in his long-range jumpers. I also believe the Jazz bench will have another strong outing. That is why I think the Jazz will win this game 124:106.