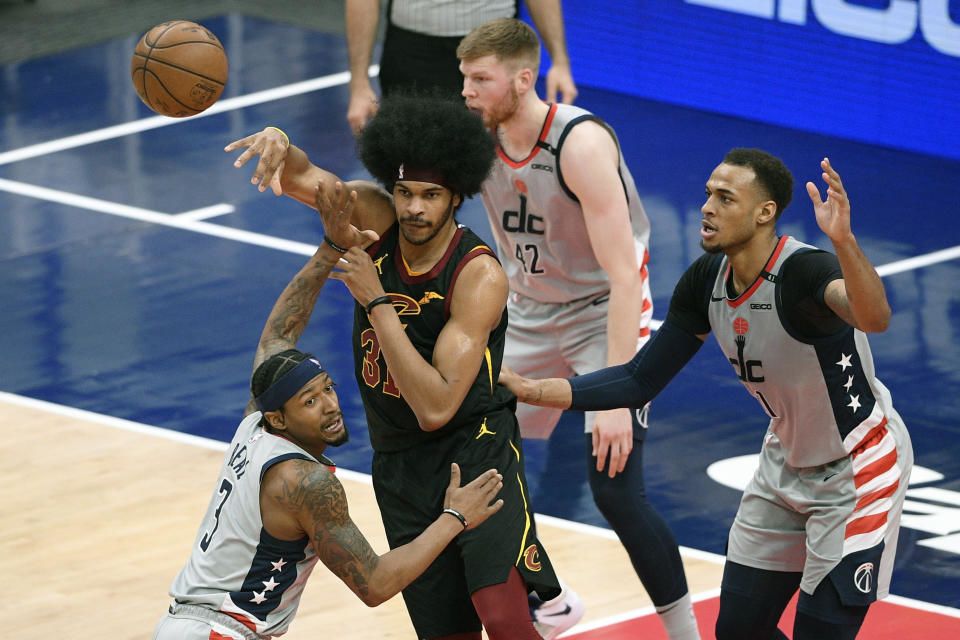 In this game, the Washington Wizards host the Cleveland Cavaliers in a typical Eastern Conference match-up. Wizards have 14 wins and eight losses meanwhile Cavaliers have notched 12 wins and ten losses. Cleveland is on a three-game winning streak and is one of the best teams away from home, can the squad eke one out against the Wizards? For a simple overview, head over to the “Notes section”.

Washington Wizards: Wizards average around 106 points a game, which places them outside the top-fifteen ranked teams. The production has improved considerably but the offense is still a work-in-progress. Against Dallas, the team scored 120. San Antonio held the Wizards to just 99 while Minnesota saw Washington drop 115. In two of the last three games, the team has scored 115 or more. The Wizards have shown improvement and Daniel Gafford’s more imposing play on the offensive end has helped the team quite a lot.

Cleveland Cavaliers: Cleveland is among the bottom-6 teams in terms of points average with almost 104 Points a game. However, this can paint a misleading picture as the team has been much better recently. Cleveland has scored 111 or more in four of five games including a 115 outing and a 112 performance against two tough defensive teams in Suns and Nets respectively. The team is deep at the Forward/Center positions and their rise can be also attributed to a better passing game compared to the early parts of the season.

Washington Wizards: On average, Washington has allowed 105.7 points per game. There is one interesting observation here. Washington allowed teams to shoot just under 31% percentage from three till as late as mid-November but that percentage has increased to almost 33%. Has the perimeter defense weakened a bit? Still, the team allows just 10 threes per game and that is the best effort in the league. Wizards defense has leaked 114 and 127 points in two of the last four outings, both against teams with losing teams. Perhaps, an improved offense has taken more energy which hurt the defense just a bit.

Cleveland Cavaliers: Cleveland is among the top three teams in limiting opponent’s points. The Cavs allow around just 102 points a game and are one of the most elite defensive squads in the league. Case in point? The team has allowed 85, 96,92 in the last three games and has held many squads under 100 points throughout the season. Like Washington, the Cavs are an elite perimeter defensive team and teams have made 10.7 threes against them, which places them in the top five.

Wizards: Washington has at times lost the advantage gained on the perimeter defense by making just 10.5 threes a game and shooting just 32% from there or so. It isn’t like that Washington’s offense is wholly three-point centric but the squad can do a bit better from out there. The team has superb finishers at the rim and that is why the shooting percentage is 46.1% overall. The Wizards need to go on a 5-6 game winning streak to develop more sustainability.

Cavaliers: Cleveland has issues taking care of the ball. Cavaliers are averaging 15 turnovers a game and are bottom-five in that regard. Cleveland has forced 13 turnovers a game so the team hasn’t made up for it on the other hand. However, the recent play of this team has been impressive in all regards, and it seems like Jarrett Allen’s inside presence has helped the team to make defenses work more. The Cavaliers have some of the things to polish but the team looks like a reliable group right now.

Points Range: Predicting points range is tough since we witness varied scorelines throughout the long season. Still, considering recent form, Cleveland has shown promise to score 110-115 points while Wizards have been scoring 115 or so these days. Will this be a shootout, where we see 225-240 Points Range or a grueling battle where we witness 190-200 points range? I think this will be a 200-210 Points Range game, I reckon we will see top-quality defense here.

Prediction: Wow, isn’t this one tough to predict! Wizards are stellar at home and Cleveland is equally if not more impressive on the road. Instead of picking the winner, I will tell you what I feel. I think the game will begin slow and then pick up the pace in the middle parts. We can see an eye-catching Center battle between Gafford and Allen here. I think the scoreline can read something like 106:102 in Regulation. (After I completed the section, I realized even the bookmakers have placed the Under/Over around 207 for near-identical odds!)