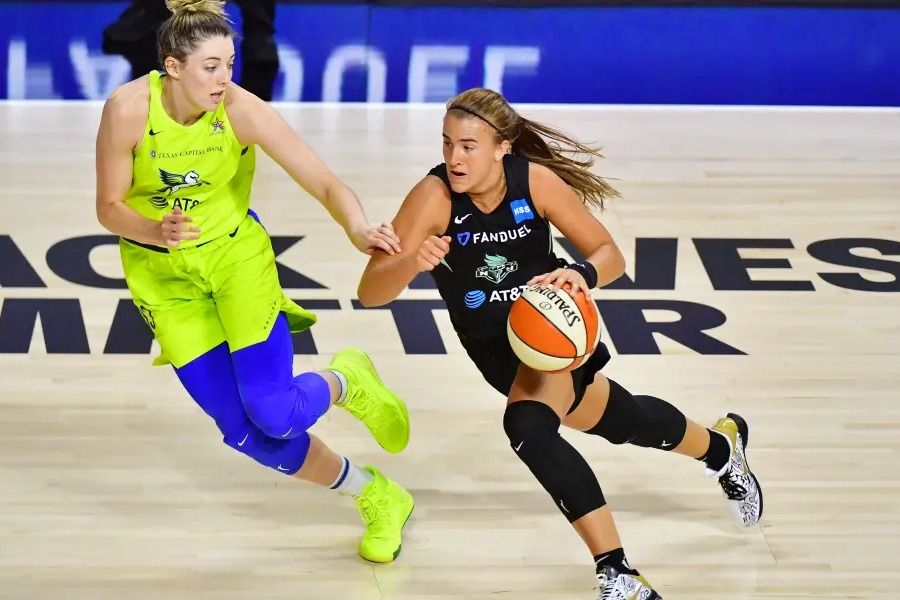 The WNBA betting is trickier than the NBA, it is not like the scoring for even the elite teams will hover around 105-120 or so. While in the WNBA, a team can score 100 in one game and then fold in the 60s in the other game. Of course, the quality of offenses and defenses in terms of trends matter but in the end, these are early parts of the season and teams are still now in process of figuring out rotations. And in this game, the New York Liberty will host the Dallas Wings. The Liberty lost a heartbreaking Overtime battle versus the Sparks, losing 86:92 despite Sabrina Ionescu’s 31 points. The Wings defeated an improved Mystics squad 94:86 as sharpshooter Arike Ogunbowale buzzed 27 points. Which team will find their outside shot here?

Ionescu has looked terrific for Liberty

Sabrina Ionescu has now had two great games, she got around 25 points in the first game, but didn’t even make a single field goal in her second game but in the last game, she was on fire, nailing 31 points, including a game-tying deep-three buzzer-beater. Her production will determine the trajectory of the Liberty’s season, a team that has repeated the mistakes of last season and will need consistency from players, especially Betnijah Laney, who can be a viable isolation scorer.

While Laney shot just 35%, Natasha Howard has found it troublesome to get it going, shooting just 0.6%(!), making just one of her 15 shots. Stefanie Dolson can be a strong option, and banked on 12 points, most of the damage coming within the three-point line. Meanwhile, Sam Whitcomb can be a strong two-way option off the bench, and perhaps she will get the starting spot soon. The bench looks a bit thin although sophomore Michaela Onyenwera and Lorela Cubaj can bring some heat, the latter being a defensive and rebounding threat.

Arike Ogunbowale is a typical example of a streak shooter, in her first game, she shot just 3/14, not able to get going for most parts. But in the last game, she made some brilliant pull-up threes early in the shot-clock, as she dipped 27 points, nailing her six of 12 three-point attempts. Then we have Allisha Gray, who is an incredible off-the-dribble player and she had 21 points in the last game. On the other hand, Marina Mabrey can be an incredible scorer too alongside Arike.

Isabelle Harrison had an incredible night in the last game, getting a 15-point 10-rebound double-double while Kayla Thornton had 12 points, which meant that all the starters got in double-digits as the team made a desperate second-half push. Tyasha Harris grabbed 10 rebounds in the last game in a brilliant effort off the bench. The Wings made 13 threes on around 45% shooting while getting 19 of her 23 free throws to drop. The Wings will need Arike to shoot a high percentage if they are to become a deep Postseason team. So, how will they respond here?

Points Range: Both teams have not hit a constant rhythm on the offensive end yet but have huge potential. Both Sabrina Ionescu and Arike Ogunbowale are incredible deep shooters and their productions determine how far their teams go. On the other hand, the defense has looked a bit suspect for the Liberty and they will need to contain the offensive rebounding of the opposition. Dallas has the potential to become an elite three-point shooting, more so than the Liberty but Liberty can develop into a brilliant passing team. It will be interesting how these two shoot from beyond the arc here. I predict a scoring range of 160-170.

Prediction: The sharpshooting of Arike and Sabrina sets the tone for the team but the Wings’ backcourt looks a bit more loaded in terms of having Allisha Gray and Marina Mabrey, both capable scorers. On the other hand, the Liberty looks a bit lax in terms of their backcourt production while the frontcourt of Howard and Laney has begun in an ice-cold fashion. However, I see at least one among Howard and Laney getting it together, while Ionescu is the icing on the cake. I take them to win this 87:80.