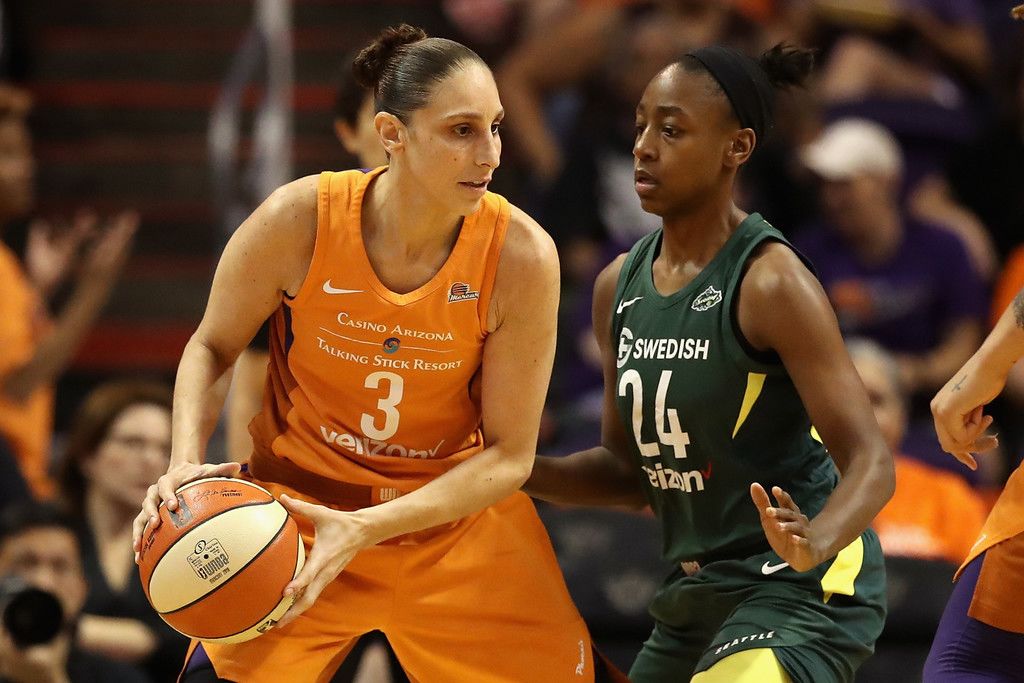 One player can change the complexion of a Franchise and that one player can make all the difference in the world. That one player can be the Franchise Face or a huge supporting cast member who gets it done on both ends of the floor. And that one player for the Phoenix Mercury is Brittney Griner, whose status remains up in the air for the season. And how will they respond when they face a loaded Seattle Storm. The Mercury lost to the Aces in the last game 106:88 as their defense got completely exposed. On the other hand, Storm was also handed a loss by the Aces as they faced a 74:85 defeat despite Breanna Stewart’s 21 points night. Can the Mercury showcase better defense this time around?

Mercury’s defense without Griner is suspect

The Mercury surely missed Griner in the last game as she is able to cover teammates’ mistakes and can close down on both shooters and also shut down the driving lanes. Not only that, Griner can stall the opponents’ progress in the fastbreak scenario and is an athletic nuisance. Tina Charles is an incredible scorer but she is nowhere close in terms of defense to Griner. Charles had a rough Mercury debut, scoring just 5/16 in the last game, and shooting just 1/5 from the three-point line in the last game.

Shey Peddy scored 16 while Skylar Diggins-Smith floated in 25 points on a 10/18 shooting night. However, Diana Taurasi shot just 3/11 in the last game but did dish 9 assists. Sophie Cunningham nailed 12 points off the bench but the team did miss Kia Nurse who brings both defensive end and offensive energy. The Mercury allowed around 60% in the last game and that will not get it done. How will the Mercury defense respond here?

Storm will need to help out Breanna and Loyd

Breanna and Loyd combined for 40 points in the last game but the trouble is that apart from these two, the team looks lacking in options in terms of shot-creation. Gabby Williams shot just 0/7 from the floor and she will surely need to do more at this point. Ezi Magbebor, the young player had 4 blocks in the last game but her offensive game needs really a lot of polishing, and oh world, does the Storm need her to be more aggressive offensively.

Sue Bird for all her playmaking talent, isn’t the same scorer in the twilight of her career and that is why guards Briann January and Ephiphany Prince will have to produce quality shot creation off the bench. Seattle has done well on the defensive end and this is what can propel them to greater heights. How can the Storm find more from their scorers apart from Loyd and Breanna?

Points Range: The Storm has been a bit off on the offensive end in the last game but they have a highly experienced team that knows how to bounce back. Ezi needs to do more on the offensive end and she hasn't set the right tone yet. On the other hand, the supporting cast around Loyd and Stewart also needs to buckle up. Mercury’s season has been a muddy one already with the absence of Griner and with an aging backcourt minus Peddy, the team needs a strong help defense. Tina Charles isn’t among tough defenders so perhaps Sophie Cunningham can be given an extended run. However, who is going to stall Breanna here! I see a high-scoring game here and the range in 170-180.

Prediction: The trouble for the Mercury is that they lack the legs to keep on the defensive end but we have only seen one game so far. I am 100% sure that Mercury’s coach Vanessa Nygaard will have some adjustments. I believe a lineup of Peddy-Skylar-Diana-Sophie-Charles can be the way forward but it is a tricky scenario without Griner. How will the Mercury stall Breanna who has looked in her usual touch. I believe the Mercury will regroup and extract a 88:83 win here.