Afghanistan vs Namibia T20I: Namibia will struggle against Afghan spinners 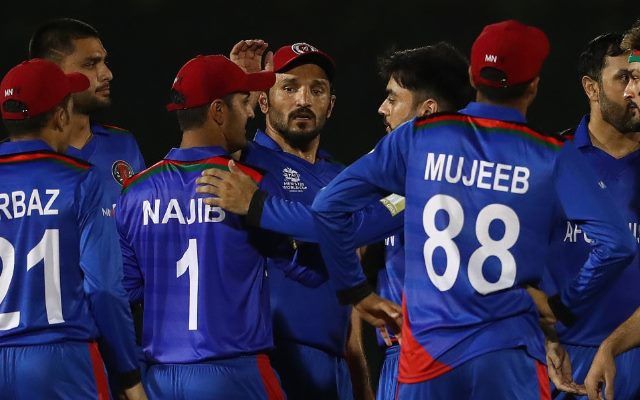 As the race to the Semi-Finals inch closer, each game holds more value in the ICC T20 Men’s World Cup. In this Group 2 clash, a heartbroken but sturdy Afghanistan outfit meets a hopeful Namibian team. Afghanistan comes into the game after losing a close affair versus Pakistan while Namibia beat Scotland in the team’s last contest. How will Namibia fare against the spin bowling of Afghanistan that troubled a team like Pakistan? Quick notes related to the games can be found if you slid to the “Pitch Conditions and Notes” section.

The duo of Rashid and Mujeeb

Rashid and Mujeeb have been phenomenal to begin the tournament. After combining for nine wickets against Scotland, the duo paired for 3 wickets against Pakistan with Mujeeb getting one wicket for just 3.5 runs per over, while Rashid claimed two at 6.5 RPO. Mujeeb is known for darting bowls into the batter, not giving them any room while mixing it up with tossed-up deliveries. Meanwhile, Rashid brings out a number of variations and has one of the most potent googlies you’d ever see. The duo was a handful for Pakistani batters who are known as well-versed players of spin so Namibia has a huge task at hand here.

Slog it even if you get out

Afghanistan plays with an approach that reminds one of the West Indies. Just go for big shots, don’t bother keeping the ball down, and fetch sixes. There are no nuances, no second thoughts, just batter it out of the park. It didn’t work against Pakistan for the initial parts but some of their batters, especially openers Mohammad Shahzad and Hazratullah Zazai are tailor-made for this approach. Meanwhile, batter Mohammad Nabi can show poise and act as a stabilizer, contradictory to the gung-ho approach, bringing out that collected manner while making 35 runs off 32 balls and rescuing the innings(which he has done countless times now). Gulbadin Naib showed promise down the order with his 35 runs in 26 balls but it is clear that Afghanistan will need Zazai, Shehzad, Gurbaz, and Zadran up-front to make headways.

Don’t sleep on this team

Afghanistan rattled a Pakistani team that has put away India and New Zealand in more clinical fashions. The hit-out or get-out batting approach suits the nature of the team while they can always bank upon their spinners to perform under pressure. If this team can find more contributions from their three other bowlers than Rashid and Mujeeb, they will become difficult to counter for New Zealand and India too. The batting needs just a LITTLE more meticulous approach, knowing what deliveries to target.

Peak performers in Super 12s are given below:

Namibia: Middle-order is getting it done

Namibia’s batting strategy: Soak up Rashid and Mujeeb then hit out?

Namibia has had a lovely journey so far and whether they lose all the games or scrap out some wins, that doesn’t take away from how they have reached here and fared. The team is middle-order heavy with David Wiese, Gerhard Erasmus, and JJ Smit having been the team’s three main rescue acts so far. Wiese can slog the ball out of the park and has already played a couple of quick-fire knocks in tournaments including a 40-ball 66 runs inning and 14-ball 28 runs knock. The top-order hasn’t set fire so far but Craig Williams can hold an end at least. Meanwhile, Zane Green is due some runs and may have to face the troublesome duo of Mujeeb and Rashid up-front.

What will be Namibia’s batting approach against Afghanistan then? See off Rashid and Mujeeb then attack Naveen, Nabi, and Janat? (or basically the other three bowlers than the spin duo). Perhaps they’d like to keep David Wiese and JJ Smit for a late charge and make sure there isn’t a collapse early on, like in the case of Scotland. Will they be able to see off the two stalwarts? However, they can’t underestimate Naveen-ul-Haq and Mohammad Nabi may show more control soon.

The bowling for Namibia is seamer-oriented, in contrast to Afghanistan. Ruben Trumpelmann showed in the last game his arsenal of in-swingers, claiming 3 wickets in the first over. Meanwhile, Jan Frlynick can bring some pace in the mix and claimed two wickets while giving just 10 runs in the last game. David Wiese brings a different flavor and uses his slower deliveries well and JJ Smit has also shown control so far, making this a formidable pace quartet.

If Namibia can withstand the initial flurry of both Afghani batters and bowlers, they can lodge something special here. Afghanistan’s batting approach has some glaring holes and Namibia has shown that they can extract vulnerabilities well. In terms of batting, the team needs to just keep wickets in hand for a late finish where JJ Smit and David Wiese come into play. The top-order is also due for some runs and now is the time to hit form.

Peak performers for Namibia in the Supers 12s are given below.:

Pitch: The Abu Dhabi pitch has mostly shown low-scorers including a 120s odd game versus Australia and South Africa to begin this round. However, English batters looked comfortable during their chase of 125. This is the second time in a row that Namibia will play here and the last game looked tough for batting with the side hobbling towards a 110-run mark. However, spinners like Mujeeb and Rashid don’t care about what pitches they bowl on since they rely more upon control than raw turn. Namibia has a task at hand even if this pitch favors batters this time around.

Afghanistan can prove to be intimidating for the Namibians. We back Afghanistan, because they pounced on Scotland and skittled them for 60 after putting up 190 and Namibia, had to struggle against Scottish men before achieving their target. Even though Namibians are on a three-game win streak, the threat of Afghanistan comes at a more elevated level.