ICC Men’s T20 World Cup. First Round, Round B 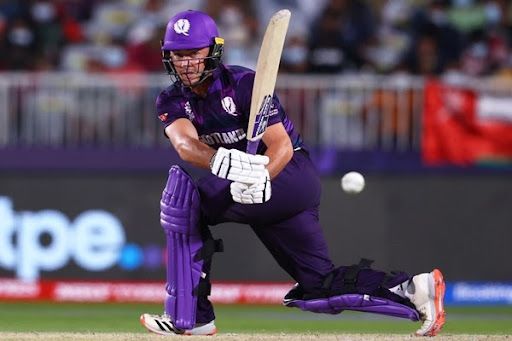 In this first-round match, Scotland clash against Papua New Guinea (PNG). Scotland comes in the game after a magical win versus Bangladesh meanwhile PNG stood no chance against Oman in the first game of the T20 World Cup.

Scotland’s confidence will be sky high when they enter this game to tackle the Papua New Guinea outfit. Scotland was 53/6 in the last game against Bangladesh but they showed the ability to perform under pressure and made a huge comeback, posting 140 and winning by six runs. Chris Greaves showed his mettle with both bat and ball, scoring 45 runs off 28 balls and claiming two wickets for 19 runs in three overs. George Munsey made 29 runs at the top and that is no surprise since he is one of their main batters.

Brad Wheal did a terrific job while bowling, claiming three wickets for 24 runs. Spinner Watt was no less impressive, going at just 4.75 RPO and also claiming a wicket. Josh Davey also notched one wicket for 24 runs. It means that both the pacers and spinners of Scotland got the ball to talk against a sturdy Bangladesh batting line-up.

PNG looked out of sorts versus Oman in the first match. The team only received significant contributions from Charles Amini and Assad Vala. Amini made 37 runs in 26 balls and Vala chipped in with a terrific 56 runs innings off 43 balls. However, once the batters fell, PNG had no answer for the Oman bowling where Zeeshan Maqsood showed the value of spinners in the format, claiming four wickets.

Bowling-wise, Papua New Guinea fared even worse on a pitch that did help seamers and spinners alike. The team leaked runs at 9.58 RPO which is never going to get the job done when defending 129 runs. The squad bowled a lot of long hops and full tosses which takes the pitch of the equation. Papua New Guinea has to find rhythm in terms of bowling if they are to make any headways.

The average score in the four T20 World Cup innings so far can be calculated at 133.5 but that includes a 131/0 by Oman made at a 9.58 RPO. However, the game between Scotland and Bangladesh revealed that the seamers and spinners can choke out the batting as the pitch offered more than a decent balance between the bat and ball. Bangladesh spin duo of Shakib and Mahedi picked five wickets in eight overs, going at just 4.5 RPO while Scotland spin options gave runs at around 6.5 RPO, claiming three wickets, including a 4-19-1 spell by Mark Watt and 3-19-2 by Greaves.

In terms of fast bowling, Bangladesh bowlers conceded 8.22 RPO for four wickets while the Scotland pacers looked more impressive, conceding just 6.7 RPO and picking up 4 wickets. This indicates two things, first, there is help for both types of bowlers with spinners having a slight edge, and second, that Scotland’s bowling clicked in all spheres spelling doom for PNG. Conversely, Papua New Guinea bowlers picked no wickets against Oman and conceded more than 9.5 RPO, which is an ominous sign and it means Scotland has an overwhelming advantage.

Papua New Guinea stands a little to no chance versus Scotland who would be buoyed after beating a favored side in Bangladesh. Scottish bowlers showed their fortitude in the last game and if the batting clicks, the team can rack up runs at a quick rate against Papua New Guinea. Scotland comes as clear-cut favorites to win second in a row and PNG will most likely see another big defeat.