Palmeiras vs Atlético Mineiro Prediction: Verdão to win a battle of two grandees 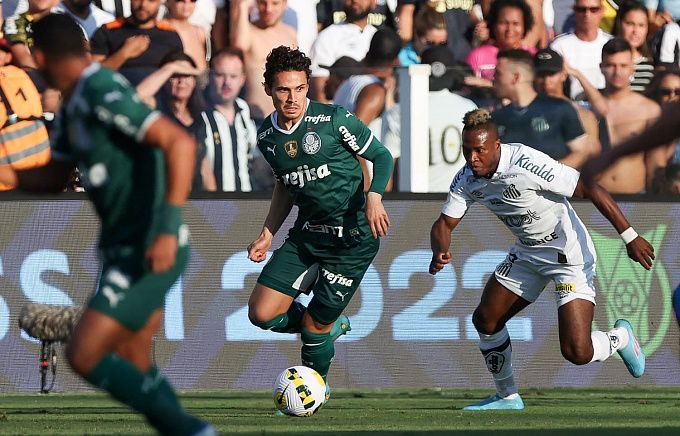 The central match of the Brazilian Serie A round 9 will take place in São Paulo, where Palmeiras will face Atlético Mineiro. The Big Green are quoted as slight favorites, as a home advantage can certainly become decisive in the confrontation between the leaders, but it's not a given that it will be so.

Palmeiras' winning streak stretches to six consecutive matches; last round, the Greens beat Santos 1-0 away, the only goal of that game coming from Gomez, with Veiga not converting a penalty in the 73rd minute of play. This victory helped Palmeiras maintain their lead in the Serie A standings. However, it should be noted that Atlético Mineiro and Corinthians are second to the Greens only on goal difference. In the case of a draw, Palmeiras will definitely remain above Galo in the standings, but not necessarily in the first position. We have to see how Corinthians will play tonight. Palmeiras' home stats are eighth in the standings, 7 points in 4 games, +2=1-1, 8-4 goal difference.

Atlético Mineiro sensationally lost to Tolima in the last round of Copa Libertadores, but that didn't stop Galo from making the tournament's playoffs from first place in Group D. After that relative setback, the Rooster beat Avai 2-1 at home. In the championship table, Galo is second, behind Palmeiras on goal difference. And if they win in São Paulo, they will very likely lead the Brasileirao standings. On the road, Atlético Mineiro has the seventh-best statistics: three games won and two drawn on a goal difference of 4-3.

Palmeiras and Atlético Mineiro have played as many as 43 matches against each other, fourteen won by the Big Green, with 13 draws and 16 victories by the Galo with a goal difference of 51-58 in favor of Atlético Mineiro. It should be noted that the grandees of Brazilian soccer have faced off in 4 tournaments. Besides Serie A, there's Copa do Brasil, Copa Sudamericana & Copa Libertadores. In Campeonato Brasileiro, there have been 37 head-to-head encounters, thirteen won by the Greens, with 10 draws and 14 wins by the Galo with a goal difference of 47-53. On the Palmeiras field, there have been 22 matches: +9=6-7, 29-28 in favor of Verdão. Interestingly, last season the teams played four games: two, of course, in the national championship, and two more in Copa Libertadores. In the end, there were three draws and a 2-0 win for AM.

Palmeiras is in excellent form, the club from São Paulo not having lost in a very long time, unlike Atlético Mineiro. It is extremely important for Verdão not to lose to their direct rival in a home game. We believe that the Big Green will score at least one point in the upcoming game. As for the total, we don't expect high efficiency in the centerpiece, because these are the teams with the best defenses in the league that we are talking about. Here are the betting options for you to consider: