Campeonato Brasileiro Serie A. Round 4 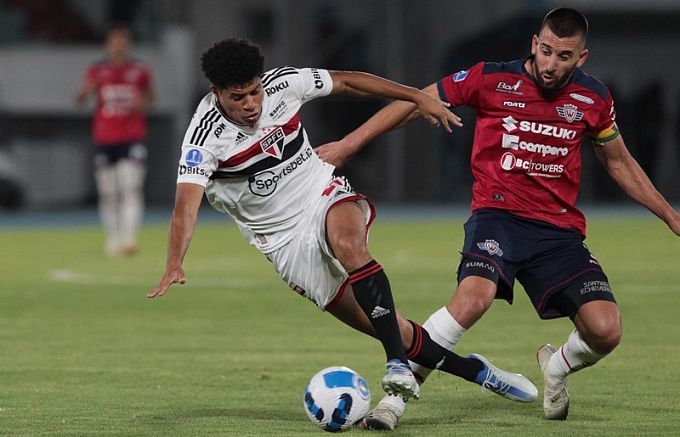 Round 4 of Campeonato Brasileiro Serie A will end with the central match, the Paulista derby São Paulo vs Santos, with Paulista Tricolor quoted as the big favorites. São Paulo is not off to the best start in the national championship, unlike Santos. Should the Fish win at Morumbi, they will regain the lead in the Serie A standings.

Between two victories in Copa Libertadores, São Paulo played three matches in the domestic arena and did not win once during this period. In Copa do Brasil, the Tricolor played a 2-2 draw with Juventude, in the national championship they lost at the Maracana 1-3 to Flamengo and played a 1-1 draw with Bragantino, also away. As a result, São Paulo is only 13th in the standings, with four points under their belt. However, if they win on Tuesday, the Sovereign will climb straight into the top 6, i.e. Copa Libertadores zone. It is important that São Paulo is on a tight schedule. In three days after the match against Santos, the Tricolor will play a Copa Libertadores match in Chile, and in another three days they will face Fortaleza on the road, and then there’s a return match against Cuiaba in the Copa.

The Fish also represent Brazil on the international stage, in Copa Sudamericana. Between games against Universidad Católica and Union, Santos played three matches on the domestic scene. In Copa do Brasil, Santos was weaker than Coritiba in the away game (0-1), in the championship, the Fish beat Coritiba 2-1 and America Mineiro 3-0. Before round 4 started, it was Santos that led the league standings, but at the moment the Fish are only fourth in the peloton, two points behind Corinthians, one point behind both Bragantino and Atletico Mineiro.

São Paulo and Santos have played 69 matches against each other, the Tricolores having won 23 games with 13 draws and 33 wins for Santos. The teams have crossed paths in three tournaments: Serie A, Campeonato Paulista, and Copa do Brasil. In Serie A, there have been 45 head-to-head encounters, and Santos also enjoys a slight advantage: +20=9-16, 69-55 goal difference. But on São Paulo’s field, it is the Tricolor who have an advantage of +17=3-14, 53-52. Note the very low number of draws at Morumbi, only 3 games, accounting for 9% of the total. In the 2022 season, the teams have already crossed paths once in Campeonato Paulista. São Paulo was stronger than their opponent, winning 3-0 on the road.

São Paulo has already beaten Santos this season, though under a different coach, but still. The Fish had a better start to Serie A, but it was only because of the easier schedule than that of São Paulo. The Tricolor already had time to play Flamengo and Bragantino, the two teams representing Brazil in Copa Libertadores, and Santos had weaker opponents. We believe that São Paulo will beat Santos for the second time this season and move up to the Copa Libertadores zone.First bet: H1 (-0.75) for 1.75.

In the state championship, São Paulo defeated Santos 3-0. Now we expect another win-to-nil, though with a narrower margin. Second bet: Correct Score 2-0 for 6.50.