Colombia vs Ecuador: The Cafeteros are taking revenge for the November defeat 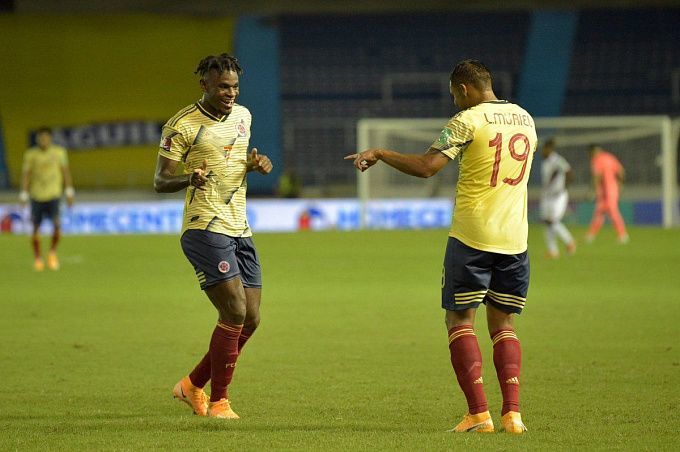 In their last encounter, the Ecuadorians defeated the Colombians 6-1. Will Reinaldo Rueda's men be able to take revenge for their last loss? Our prediction: this time the Cafeteros will be closer to success!

Colombia is one of the strongest named teams in South America, but every time they lack something to achieve great success. For example, two years ago at the continental championship, they got through the group stage flawlessly, winning all three games with a total score of 4-0, but in the quarterfinals, they lost to Chile in a penalty shootout - 0-1. The selection for the 2022 FIFA World Cup is also very difficult since in the first six games they managed to win only two matches over Venezuela and Peru with the same score of 3-0 and drew two times. They are now in fifth place in the standings.

The Ecuadorian team failed at the last Copa America, scoring only one point in three games in the group stage, so it was expected to miss the playoffs. Their qualifying for the 2022 World Cup was also shaky. They suffered three defeats in six games, their failures against the Brazilians and Argentinians were quite understandable, but the failure in the game with the Peruvians caused bewilderment. Fortunately, in the remaining three meetings, the Tricolores defeated Uruguay, Bolivia, and Colombia with a total score of 13-5, so now they are in third place in the standings, but they lack stability.

The last game between Colombia and Ecuador was horrible for the Cafeteros, as by the 39th minute they were already losing 0-4, and in the 40th minute, the coach made four substitutions to stop the humiliation. We must understand that the difference in class between the two opponents is not so huge, but the Ecuadorians were so confident and could not stop hammering the Colombians. There is no doubt that this will be a very different game, and in the previous four tussles, the Cafeteros were the only ones to be stronger. As a result, we should bet on the victory of Colombia with odds of about 1.91.

Ecuador and Colombia have been incredibly productive in their World Cup 2022 qualifiers. In the six meetings between the Ecuadorians and Colombians, 24 goals have already been scored (4.00 goals per game average), the only difference being that the Cafeteros have a negative goal difference and their opponents have a positive goal difference. Yes, the Copa America is a much more transient tournament than qualifying for the World Cup, so there should be more responsible for the result, only what does it matter if the defenses of both teams are terrible. With this in mind, the best option for the forecast seems to be a total of more than 2.5 goals at odds close to 2.20.

Luis Muriel is Ecuador's most dangerous forward player. He has already scored three goals in six games during World Cup 2022 qualification, and he does not always spend 90 minutes on the field. The 30-year-old forward has a similar situation at Atalanta, where he regularly makes substitutions and is the team's top scorer with 22 goals last season. In such a situation, it is worth taking a closer look at a bet on Luis Muriel's goal at an odds of around 2.75.