Toulouse vs Lorient Prediction: Most spectacular match of the round 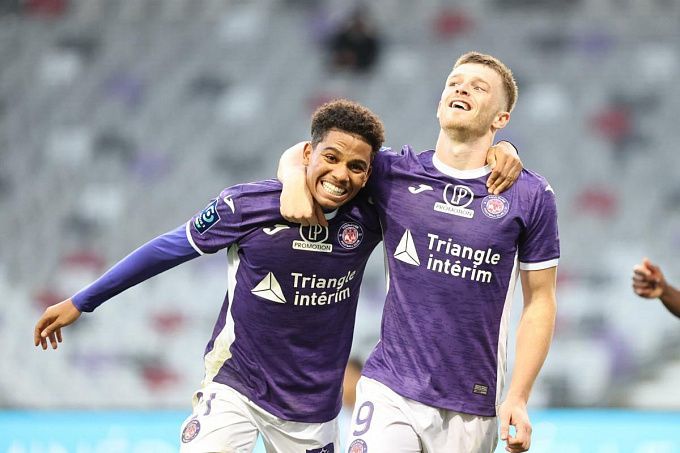 Toulouse and Lorient have played a total of 3 matches in the current championship, and so far, they have not suffered a single defeat. Bookmakers believe Les Violets will beat Les Merlus. Should we bet on the favorites?

In the last Ligue 2, Toulouse finished 1st, and it is fascinating to look at this team in the top division. Les Violets scored a lot last season, and this summer, they still strengthened the attacking line, getting Zakaria Aboukhlal and Thijs Dallinga. Both were already in the starting line-up at Toulouse and scored in Ligue 1. Last year's leaders Rhys Healey and Rafael Ratao also managed to distinguish themselves, the team scoring 4 points in 2 rounds to take 5th place in the table. Toulouse is pleased with the absence of major losses in the squad: only Guillaume Restes is injured, and the 17-year-old has not played in the main team.

After a 1-1 draw with Nice, Philippe Montanier's players beat Troyes 3-0 away. The previous meeting was rich in exciting moments, and Toulouse did not take all their chances. Zakaria Aboukhal could have added a goal to his assist, but the Moroccan failed to beat the keeper. Troyes also had some scoring chances, so there was plenty to be said about Los Violets defenders.

Last season, it seemed that Lorient should be out of Ligue 1, but even now, the team saves face. Yes, one of the games involving Les Merlus was canceled, but in the opening round, they sensationally defeated Rennes 1-0 away. However, Lorient's success cannot be entirely attributed to luck. Of course, the opponent scored an own goal, but Regis Le Bris' men also created some decent chances. Armand Lauriente could have converted the double to increase Les Merlus' advantage, but he failed to beat the keeper. By the way, in that meeting, all the strongest played. In addition, the club strengthened the defense, having loaned Chrislain Matsima from Monaco. The 20-year-old defender has already played 16 games for the Monegasques in Ligue 1, and he could perform even better in a less competitive environment.

In their last 10 head-to-head encounters, Toulouse and Lorient have won four games each. Almost four years ago Lorient defeated the opponent 1-0 away in the French Cup.

Toulouse can play bright, attacking soccer against comparable-level opponents, and the recent match against Troyes confirms it. Lorient, however, also started the season in good health, and even against the club from the top 5 away, they looked very, very decent. The visitors do not need to sit on the defensive against the Ligue 1 newcomer. They need to try to take three points. Toulouse had minor problems in defense against Troyes. Les Violets could have easily conceded 2-3 goals from Nice. I suggest betting on the following outcomes: