Lazio vs Milan: The opponents will be extremely cautious 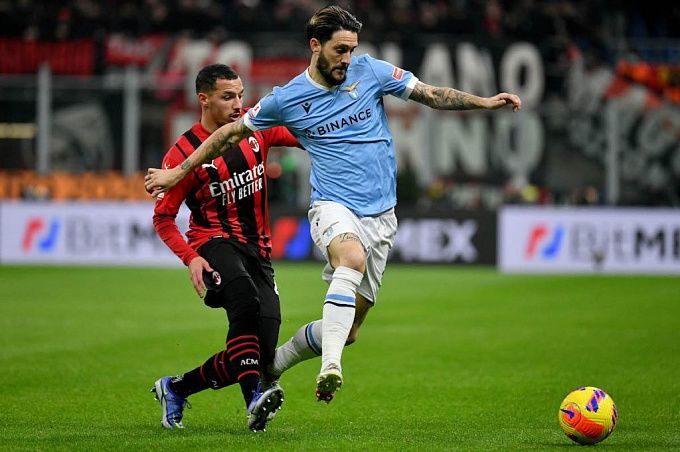 AC Milan, the leader of the championship, will face No.6 of the tournament, Lazio, in the centerpiece of Sunday's Serie A program. Who will be stronger? Let's choose several options to bet on.

Lazio is still in the European zone

Last round, Maurizio Sarri's team played a very difficult home game against Torino. Catching up, the Biancocelesti were unable to get in to the opponent's net for a long time and managed to get back into the game only on 90+2. With an assist from Milinkovic-Savic, Ciro Immobile netted his goal. 1-1, as the forward with 25 goals strengthened at the first place in the scoring race of the season, 2 goals ahead of Dusan Vlahovic, and Lazio remained in the 6th place, which means next season's participation in the Conference League. The handicap of the Romans from the 7th place, which is currently occupied by Fiorentina, right now is zero – the Violets have the same number of points as the Biancocelesti.

Milan has no margin for error

The Rossoneri can win Serie A for the first time since the mid-2000s. Stefano Pioli's team is approaching the match with Lazio in 1st place. Inter, who sit second and whose match against Roma has already taken place, is 2 points behind. At the finish of the championship, Milan has a very tough schedule. In addition to Lazio, the Red and Blacks will play Fiorentina, Verona, Atalanta, and Sassuolo. So Milan cannot pick and choose opponents in the final part of the season. They have to beat everyone.

In the previous round, AC Milan defeated Genoa 2-0, with Leao and Messias scoring the goals. In the midweek, the Rossoneri also played the Milan derby in the Coppa Italia semi-final and lost 0-3 to Inter.

The rivals have met twice this season. Milan won both matches at home, 2-0 in Serie A and 4-0 in Coppa Italia.

Both teams are solving important tournament tasks at the finish of the championship. Lazio is trying to retain their position in the European competitions, and Milan is fighting for the long-awaited Scudetto. The value of the upcoming game will force the opponents to play as cautiously as possible. That means few goals will be scored. Pedro missing and Milan's excellent defense this season also incline us toward a low-scoring option.