Napoli vs AC Milan: the Neapolitans not to lose in a low-scoring match 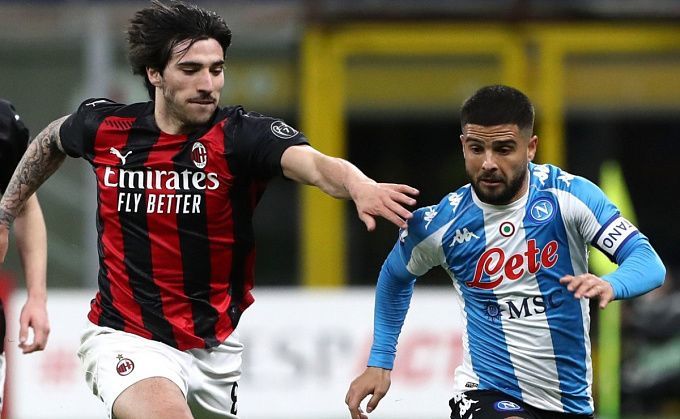 Napoli earned a crucial victory, beating Lazio away and climbing to first place in the standings. Will Luciano Spalletti's team be able to consolidate their success against AC Milan? We'll select a few options to bet on at once.

Last Sunday Lazio hosted Napoli in Rome. The home team got off to a flying start but did not manage to score. Napoli took the lead in the second half with an effort from Lorenzo Insigne but lost the lead on 88' when Pedro scored a goal. However, it was not a draw. On 90+4, Fabian Ruiz netted the winning goal through the same Napoli captain Insigne. 2-1, as Napoli overtook Inter in the table and caught up with AC Milan. Luciano Spalletti's side are back in first place on additional points. Will they be able to consolidate their lead following their home game against the Rossoneri?

If Stefano Pioli's team were to consistently collect their points, they could already be breaking away from their rivals, given their difficulties. But so far AC Milan have only been steadily losing points. On the previous matchday, the Rossoneri failed to defeat Udinese. 1-1 – the Little Zebras responded to Leao's goal with a goal by Udogie. Milan have not been earning enough points for the second round in a row. Before the match against Udinese, the Rossoneri had a 2-2 draw with Salernitana away. With such losses, it is certainly difficult for Milan to qualify for the Scudetto.

In the first round of the current championship, Napoli outplayed AC Milan 1-0 away.

The last face-off in Naples ended with Milan's victory 3-1.

Napoli continues to be the best defense in Serie A. Luciano Spalletti's team has conceded only 19 goals in 27 rounds. AC Milan is also better at defense than offense. Stefano Pioli's team is 4th in the league in conceded goals. The value of the upcoming game will force the opponents to pay even more attention to defense. So Total Under here is very likely. In addition, Napoli seems to have a better chance of success. The Neapolitans play at home, and in general look more stable lately and demonstrate the margin of safety, as in the previous-round match against Lazio.

Prediction: Napoli will be closer to winning a low-scoring match.