Real Madrid vs Granada: Bet on a confident win for Real in a high-scoring match 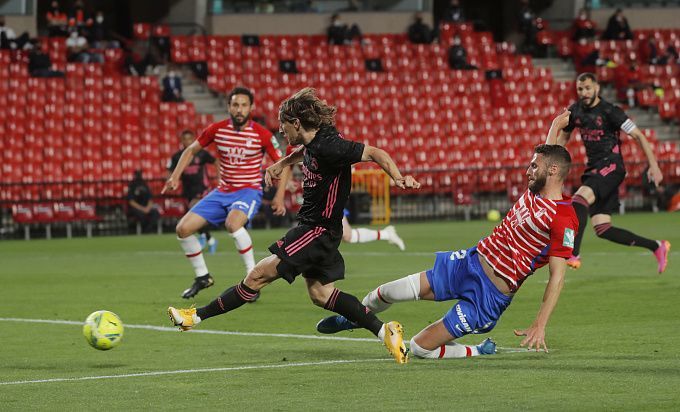 The Sunday pool of the Spanish La Liga round 2 will end with a match between Real Madrid, the leader of the Spanish championship, and Granada. Madrid are the favorites of the upcoming meeting as the home team, the standings leaders and just a more high-profile club. Also worth mentioning is the fact that Madrid defeated Granada 4-1 away in the first round of the current draw.

On February 3, Real Madrid crashed out of the Copa del Rey, losing away to the club from Bilbao with the score of 0-1. The only goal was scored in the 89th minute by Berenguer following a pass from Vesga. Throughout the encounter, at least territorially, the advantage was on the side of Real Madrid but in terms of shots on goal the Basques were better, sharper and, overall, we can say that they deserved to win at home. Now it is clear that Real Madrid have the maximum motivation for La Liga.

In January 2022 Real Madrid had only three matches in the championship: the loss to Getafe, the 4-1 defeat of Valencia and a draw at the Santiago Bernabeu with Elche 2-2. Four points in three games is not a lot, but still Madrid maintain their lead in the league with four points over Sevilla. Real Madrid's home stats are third in the division, with no losses in 11 games and seven wins.

«We're hurting because we want to win every competition we're involved in. We won the Super Cup, we're in good shape in another two competitions and I don't think this defeat will have any adverse consequences. The consequence is that this defeat could make us stronger. We knew it was going to be a difficult game and we had players out. Vini Jr. gave it everything he could, they really played hard against him but that's the way it is».

Unlike previous seasons, currently Granada does not aim high. The main goal of the visitors for the rest of the season is to keep their place in the Spanish elite. Prior to the start of Saturday's pool, the southerners are in 15th position, six points ahead of Cádiz in the relegation zone. The situation is quite stable, but there are still many rounds to go, and the recent dynamics of earning points suggests that Granada has problems: they've got only two points in the last four games. And this is with them being completely focused on La Liga. Granada's away stats are average in the division, 11th to be exact. But with only one win in 11 matches, the Southerners are saved by a large number of draws, six.

«We proved that we are able to perform on par with the grandees, to be competitive. The match against Real Madrid seems very difficult, but not impossible. We're going to try to put up a fight.»

The last two encounters between Real Madrid and Granada were very high-scoring, with both games seeing Total Over 4.5. We hope that the upcoming game will also please us with such results. Real needs to make up for the loss to Atletico in Copa del Rey, and you can't say that the Madrid is very stable in the tournament. In turn, Granada needs the points, the relegation zone is not far away and approaching very fast, which makes the southerners think about collecting points even in the match at the Santiago Bernabeu. As for the outcome, the victory of the home team looks more than real, so we offer the following betting options for you to consider: H1 (-1.5) for 1.75; W1+TO (3.5) for 2.49; Correct Score 3-1 for 9.00.