Czech Republic U20 vs Canada U20: the Maple Leafs not to face a decent resistance 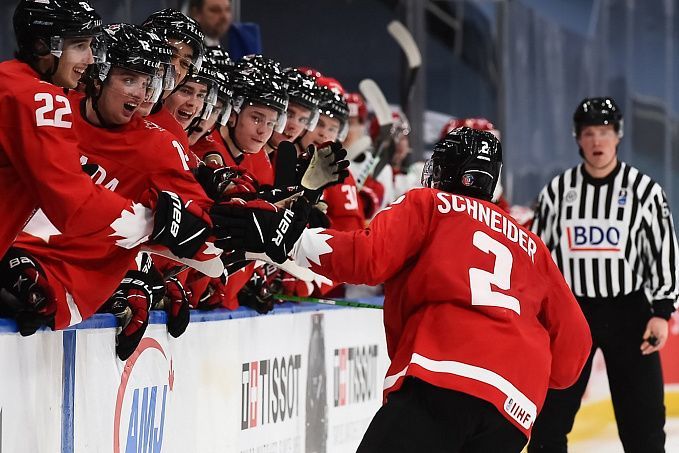 Canada beat the Czech Republic in their last five consecutive head-to-head encounters by a combined score of 27-8. Will the Czech team be able to break such a bad streak in the upcoming game? Our prediction: the Maple Leafs will be stronger again!

The last time the Czech Republic's under-20 national team was triumphant at world championships was at the turn of the century, winning two straight titles in 2000 and 2001. For 16 consecutive years they have been without a medal altogether, and in the last three tournaments in a row they have failed to progress past the quarterfinals, finishing seventh all the time. The crisis in Czech hockey is evident and there is no sign of any improvement, nor are there any young international stars. Now the Czechs are not even in the top 5 contenders for the title, and in their last four friendly matches before the 2022 World Championship they lost by a combined score of 8-18.

Canada's under-20 national team is a much more successful squad that has been the top favorite for the world championships year after year. Of course, the current tournament is no exception, although a year earlier the Maple Leafs could not reach the coveted trophy. Then the Canadians got to the finals, winning six consecutive games with a total score of 41-4, but in the main game managed to lose to the Americans 0-2. The national team management could not tolerate such a failure, so the head coach was changed, the post was taken by renowned specialist Dave Cameron. He gained that fame exactly ten years ago after losing the legendary final to the Russian national team 3-5, after two periods with the Canadians winning 3-0.

Over the past decade and a half, the teams have played ten face-offs. The Czechs have one win under their belt, while the Canadians have been stronger in nine games. The goal difference also favors the Maple Leafs, 54-16. The rivals also met at the last World Championship, when the players of the Canadian national team celebrated the victory in the quarterfinals, 3-0.

The youth teams of the Czech Republic and Canada are of quite a different level. If the Czechs can be considered middlings at best, the Canadians are the main contenders for the trophy. The entire difference in class confirms the statistics of their personal meetings, with the Maple Leafs victorious in the last five matches with a total score of 27-8. In their first game at home, they have to crush such a modest opponent, and now Dave Cameron has a very powerful squad for the tournament. As a result, we should bet on the victory of the Canadian national team with a handicap (-3.5) at odds of 1.66.

Ten years ago, the Canadian national team played in the World Championship under Dave Cameron, when at the group stage they conceded a lot and scored even more, and all four games they played they saw them score 40 pucks (10.00 average per game), which is a respectable figure even by the standards of the Maple Leafs. It should be noted that that team was quite modest in name and Tyson Barrie was the biggest star, while many didn't make it to the NHL. Now we can expect even brighter and more productive hockey from the team, so the best option seems to be Total Over 7.5 at odds of 2.24.

Mason McTavish is one of the leaders of the current Canadian national team. Under the belt of this 18-year-old forward there are as many as nine games for Anaheim in the current season, where he scored two goals and made one assist. Of course, in addition to NHL games, he continues to play in both the Junior League and AHL, gaining such important game experience. The Maple Leafs forward mocked the Russian national team before the start of the 2022 World Cup, making a double with an assist, which confirms his excellent form, so it is worth considering betting on his Total Over (1.5) at around 1.848.