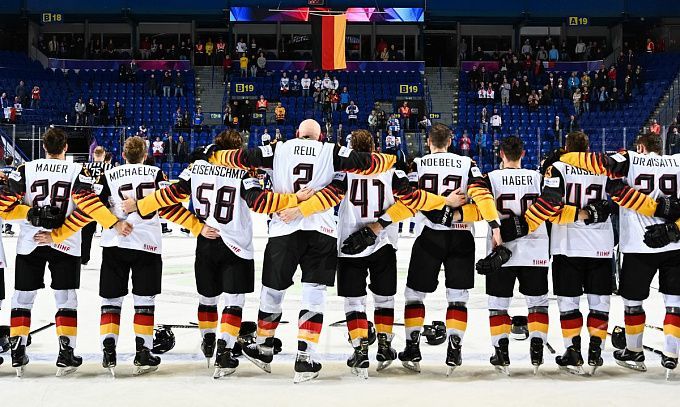 The Finnish city of Helsinki will host another match of the world hockey championship, with the teams of France and Germany facing each other on May 16 at 20:20 (UTC+3).

The France national team in general, should not be at the 2022 World Championship, as in due time, they were expelled from the elite world division. However, due to the Russian national team's disqualification, it was decided to invite the French for the vacant place. The Musketeers are unlikely to qualify for anything serious at the tournament, but they have already made a serious bid to avoid relegation to the second league again. In the first game, Philippe Bozon's men offered decent resistance to the Slovakian national team. Though they lost 2-4, in the second game, they beat the Kazakhstan national team 2-1.

The German national team is a semifinalist in the latest World Championship, but it will be extremely difficult to repeat the success of a year ago. While it is true that the Germans brought a very experienced team to the 2022 World Championship, along with a couple of young stars from the NHL, the country's leading hockey player Leon Draisaitl has already reached the semifinals of the Western Conference of the Stanley Cup, so he will not come to Helsinki. Without him, Toni Söderholm's men had already played two games in the tournament: first, they lost to Canada 3-5, and then they beat Slovakia 2-1 in a tough game. Three points after two meetings is not a bad result which gives them a good chance to leave the group.

Teams of France and Germany similarly debuted at the world championship in Finland: in the first game, they lost with a difference of two pucks and then won with the same score of 2-1. Of course, this does not mean that their level is comparable; after all, their opponents were teams of different classes. The Germans are a much more balanced, experienced, and skillful team that must score three points comfortably in the upcoming game and we can bet on the German national team's victory with a handicap (-1.5) at the odds of 1.85.

The German national team is a team with a very solid selection of players in the attacking group. In addition to the experienced players from the European championships, we also find Tim Stutzle and Moritz Seider who have proven themselves in two of their opening games at the 2022 World Championship. And the German offense is expected to be very active in this game as well since the French national team is not the most reliable in defense. Given this, the optimal option to bet on seems to be Team Germany's Total Over (3.5) goals at odds close to 1.95.

Leonhard Pföderl, German national team forward, had a great last season with Eisbaren Berlin. In 51 games, he scored 52 points (22 goals + 30 assists), becoming one of the top scorers of the club both in the regular season and playoffs. Moreover, he's already proved himself in the World Championship, registering a goal and two assists in two games played. Obviously, the 28-year-old player is in good shape, so it is worth considering betting on his Total Over (0.5) points with the odds about 1.55.