Boston Bruins vs Tampa Bay Lightning: Lightning to make use of the Bruins’ roster problems 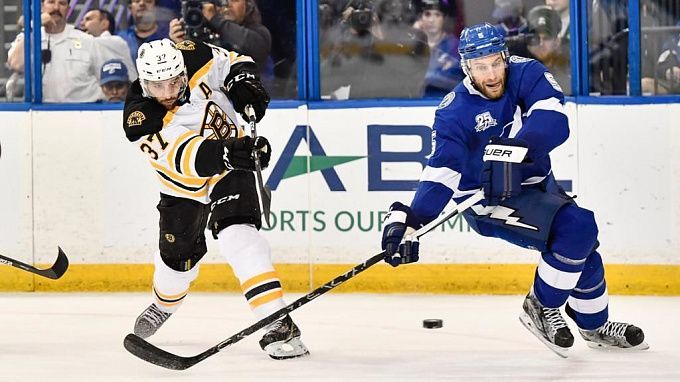 Boston had a very successful trip to Nashville, where they beat the Predators 2-0. The Bruins now have one win and one loss without Brad Marchand. Boston will play their third and final game without the suspended Marchand at TD Garden against the Tampa Bay Lightning. Will the Bruins be able to handle the reigning champion? Let's pick a few options to bet on at once.

Both games without Brad Marchand turned out to be very low-scoring. Before the 2-0 win in Nashville, the Bruins lost at home to Detroit 1-2. The trend is clear: without one of their leading scorers, Boston can only get results with defense. The players, of course, understand that and try to play at their best in that component of the game.

It’s important that in the game against Nashville, Jeremy Swayman, who saved 42 shots, recorded his 1st shutout of the season. Great job! Interestingly, this is not the first clean sheet in the 23-year-old goalie's career. Last season, Swayman had two shutouts.

Lately, the Lightning have been demonstrating their highest level on a regular basis. You could even say superiority over the entire NHL. The champion of the last two seasons has survived almost painlessly through lineup changes and quickly started playing Jon Cooper hockey. What's more, no matter how many key players are out, the Lightning are almost unaffected.

On approaching the game in Boston, the Lightning played two games against St. Louis, an away game and a home game. At home, Tampa Bay won 4-2, but it is the away game that is indicative. There, the Lightning not only played without Andrei Vasilevskiy and Brian Elliott at the goal but also could not rely on the entire first line. In addition to Kucherov and Point, Stamkos was added to the injured list. So what? As early as minute 5, the Lightning were already leading 3-0. In the end, however, they lost 3-4 in a shootout but it did not change the matter. Tampa Bay began to convince everyone with increasing frequency that they would be virtually unstoppable for the third consecutive season.

The last time the opponents met was in the 2020 play-offs when Tampa Bay handled Boston very well in 5 matches of the conference semi-finals.

Boston is unlikely to be able to handle Tampa Bay without Brad Marchand. Lightning, of course, is nothing like Nashville and Detroit, and probably will be much better at taking advantage of the opponent’s leader being absent.

Prediction: Tampa Bay will be closer to winning the low-scoring game.