Carolina vs Florida: Svechnikov & the Hurricanes have a great chance to beat Bobrovsky & the Panthers 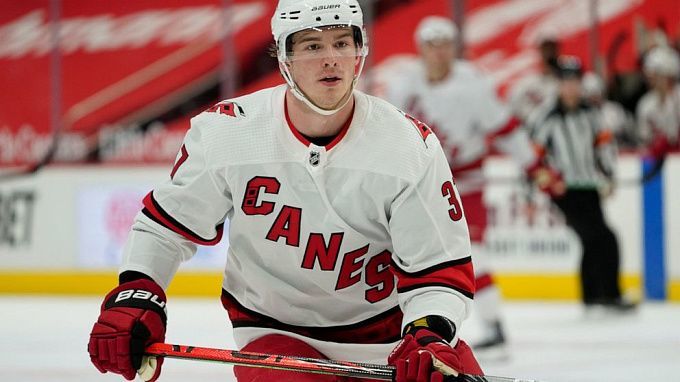 One of the main games of the reporting day will feature the Eastern Conference leaders – the Carolina Hurricanes will take on the Florida Panthers. The first two face-offs between the opponents this season ended in a win for the Floridians. Will the Hurricanes finally manage to outplay the Panthers? Let's choose several options to bet on.

The Hurricanes played 4 away matches in a row before the upcoming encounter with Florida at home. The outcome of the tour can't be called completely successful for Carolina. First, Rod Brind'Amour's team lost to Toronto in overtime, then they failed in back-to-back games against Ottawa, losing to one of the season's outsiders in regulation time. After that, they finally managed to win, and did so by demolishing Boston, 6-0, at TD Garden. However, this success was fallowed by a 2-3 loss to Minnesota. On the one hand, it was a landmark victory for Carolina to defeat Boston on the road for the second time this season. On the other hand, they scored only 3 points in 4 games. And it's not a fact that the first fact outweighs the second.

Carolina's position in the standings, though, allows the team to make mistakes. The Hurricanes are second in the Metropolitan Division and fourth in the entire Eastern Conference standings. Rod Brind'Amour's team has 32 wins (28 of them in regulation time) in 46 games and a season-best defense. Carolina is allowing just 2.37 goals per game on average.

The Panthers played their last game on February 2, when they lost 2-5 on the road to the New York Rangers. As practice shows, such long breaks are not good for the team. It will definitely take Florida a few games to get back into a rhythm.

Andrew Brunette's team has time to get up to speed. Florida heads the standings of the entire Eastern Conference, that is stays in the playoff zone by a huge margin and can afford not to care too much about the result at the moment.

The first face-off this season that took place in Sunrise ended with Florida winning in regulation time, 5-2. The second one held in Raleigh was again won by the Panthers, but in overtime (4-3).

Florida hasn't had an official match for two weeks, so Carolina has a good chance to beat the Panthers for the first time this season. The Hurricanes got into a rhythm on the road trip and will surely show some great hockey when they meet their fans for the first time since January 31. We also look forward to a duel between the Russians as Hurricanes forward Andrei Svechnikov made a double-double against Minnesota and will now do everything he can to upset Panthers goaltender Sergei Bobrovsky.