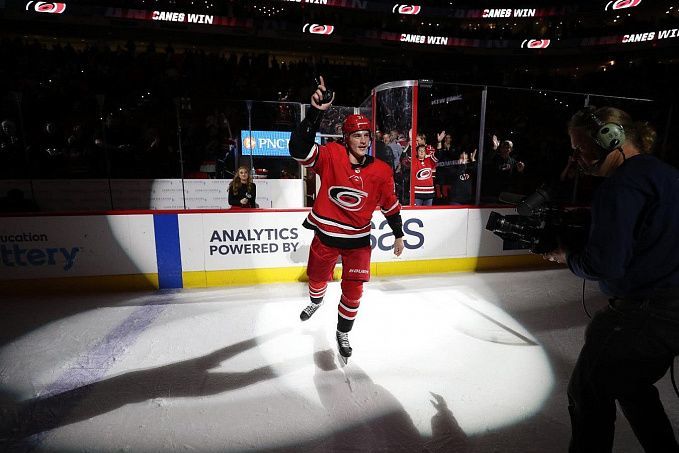 Carolina has beaten Boston in all three head-to-head encounters this season by a combined score of 16-1. Will Bruce Cassidy's team be able to avoid a playoff embarrassment? Our prediction: the Hurricanes will advance to the next round.

Carolina couldn't make the playoffs for years until Rod Brind'Amour took over the team he won the Stanley Cup in the 2005/06 season with as a player. Gradually he began to form a capable team that became a regular participant in cup battles. Still, they could not go any further than the Eastern Conference Finals. The current regular season has shown that the Hurricanes are ready to hold off another step in their development.

For a long time, Carolina has been among the Eastern Conference leaders, but in February and March, they didn't look their best, which caused their rivals to push the Red and Blacks back. Nevertheless, before the playoffs, Rod Brind'Amour's team enjoyed a run of six straight victories, three of which were under the belt of Russian NHL debutant Pyotr Kochetkov. This solid run allowed the Hurricanes to reclaim several spots, moving up to second place in the East standings.

Boston has accustomed us in recent years to making the playoffs easily, while also fighting for the top spots in the East. While the Bruins don't always succeed in cup battles, they've been consistently good in the regular season. The current regular season was an exception since the Black and Yellow had major problems in the first half. Having lost David Krejci and Tuukka Rask in the offseason, they still have a very strong roster.

Boston was floundering on the edge of the playoff zone until mid-February. Only then did Bruce Cassidy's squad pick up the pace, posting 24 wins and ten losses in their last 34 games. This streak allowed the Bruins not only to climb into the Eastern Conference's top eight but also to take the final sixth spot. A relatively good result, but the team from Massachusetts is used to the better spots.

In the history of the NHL playoffs, the teams have played six head-to-head encounters. The Bruins won five of them, and once the Hurricanes were stronger. The Black and Yellow also have an advantage by the number of wins (23-12), and by the goal difference of pucks (112-80). The last time the rivals met was in the Stanley Cup 2020 when Boston players celebrated the victory in the series, 4-1.

Carolina and Boston played each other in the playoffs two years ago, when the Bruins got an easy 4-1 series win. Since then the Hurricanes have made steady progress, while the Black and Yellow team has shown signs of regression. The fact that Rod Brind'Amour's team defeated Boston in all three regular-season meetings and in every single game they defeated their opponent 3-0, 7-1 and 6-0 is a dramatic confirmation of that. The Black and White finished significantly higher in the Eastern Conference standings, gaining the home advantage, so it's logical to bet on Carolina to qualify for the Stanley Cup for about 1.90.