Content
To top
1.
Tampa Bay did not benefit from a long break
2.
The Rangers haven't secured anything yet
3.
Expert Betting Tips
Users' Choice
12 200 USD

Tampa Bay Lightning vs New York Rangers Prediction: Lightning to win and get back into series 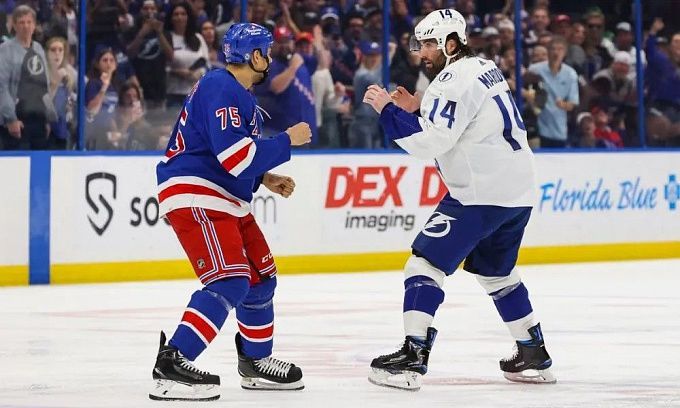 After two games at Madison Square Garden, the score in the Eastern Conference Finals between Tampa Bay and the New York Rangers is at 2-0 in favor of the Rangers. Will the Lightning be able to get back into the series in game three at their home Amalie Arena? Let's pick a few options to bet on at once.

Tampa Bay did not benefit from a long break

The Lightning ended their second-round playoff series long before the New York Rangers ended theirs. Jon Cooper's team blew out Florida, allowed to rest for nine days before the start of the conference finals. That extended downtime might have been what kept Tampa Bay from showing their best qualities in the first games of the East's main series.

The above argument is borne out by the progress that Lightning showed in Game 2 of the series. If in the first game Tampa Bay had no special chances for success (3-6), in the next meeting the intrigue was kept till the final siren. 2-3, as there is almost no doubt that the Lightning would finally get a win over the Rangers in the third game.

The Rangers haven't secured anything yet

The 2-0 series lead before the road trip to Amalie Arena leaves Gerard Gallant's team with a good chance at eventual success. It's clear, however, that it's still too early to say it's a done deal. The Rangers themselves lost 0-2 in their second-round series against Carolina but ended up in the conference finals.

Igor Shesterkin should be singled out on the Rangers roster. The Russian has surprisingly outplayed his Tampa Bay compatriot Andrei Vasilevskiy, by far the NHL's best goalie in recent years. In all, Shesterkin has 10 wins and 5 losses these playoffs, with a 2.60 goals-against average and a 92.9 save percentage.

Despite the 2-0 score at the end of the two games in New York, don't think anything is decided in the series. At Amalie Arena, Tampa Bay will rip the opponent apart, and the Rangers will have to try very hard not to break under this onslaught.

The New York Rangers have won four in a row.

It's unlikely that Gerard Gallant's team, no matter how badass hockey they show, is capable of beating the two-time consecutive champion for the third time in this series. In addition, Tampa Bay will probably get Brayden Point back in the lineup, which will add variation to the Lightning's offense. And they will win.

Prediction: Tampa Bay win in regulation time with odds of 2.024.