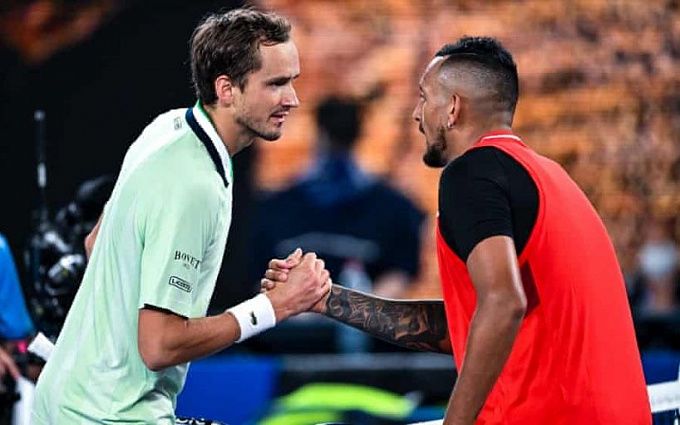 The centerpiece of the U.S. Open round of 16 will be the match between Daniil Medvedev and Nick Kyrgios. They played each other less than a month ago at the Montreal Masters, and the Australian won that tournament. Despite these statistics and Nick having the advantage over Medvedev in head-to-head encounters, the bookmakers are siding with the world number one.

There is obviously a lot of pressure on Daniil. Not only has Medvedev traveled to New York to defend his title, but the world number one has a chance to defend his status. Even Casper Ruud has a shot at the number one spot if he wins the American Major. It's an interesting situation around the ranking wars. As for Medvedev's tone, he's fine, Daniil has three wins in three games in New York, all by 3-0.

Nick Kyrgios was one of the highlights month before the U.S. Open. The Australian won Washington for the second time in his career, beating Nishioka in the final. And in Montreal, Nick not only beat Medvedev, but reached the quarter-finals, where he lost to Hubert Hurkacz of Poland. In New York, Nick, unlike Medvedev, had already lost one set to Bonzi, but Kokkinakis and Wolf were no problem for Kyrgios, without giving up a single set to these tennis players.

“As a tennis player, as an athlete, with any profession, you kind of want to be in those moments. Like, I don’t want to be playing futures or challengers on back courts with no crowd. That’s not why I play this sport. That’s not why I pick up a racquet. I want to be playing on the biggest stadiums in the world in front of millions of people, broadcasted globally. That’s where I want to be. That is why I work hard. It makes it even sweeter. I know a lot of people don’t want me to succeed. I know a lot of people hate my game, the way I do things, they way I go about it.”

Nick Kyrgios before his match against Medvedev

Daniil and Nick have played each other four times, one win for Medvedev at the 2022 Australian Open with three losses at the two Masters in Rome and Montreal, and at the tournament in Washington in 2019.

The first thing that comes to mind when you see this pairing is Total Over, Only one match out of four between these guys turned out low-scoring, all the others were long and intriguing. Both tennis players approached the round of 16 with their own motivation. It is extremely important for Medvedev to climb as high as possible at the major. Otherwise, he risks losing his first line in the ATP ranking. While for Kyrgios, each victory over a top player, and especially the world number one, is like an extra star on his conditional shoulder strap. As for the outcome, we're still on Daniil's side, who has already got one victory over Nick at the Majors in 2022, in Australia, i.e. at home for Kyrgios. Here are the betting options for the upcoming match: