Tennis. Wimbledon. Round of 64 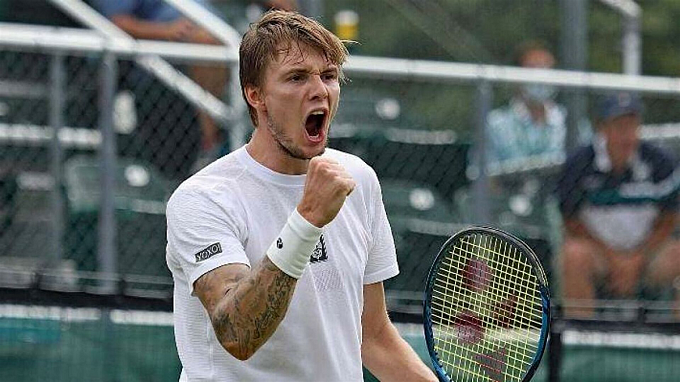 Alexander Bublik will face Dusan Lajovic in the second round of men's Wimbledon. The men played each other once at the Australian Open last year, and the Serb won that match in four sets. Despite this result, bookmakers are on the side of the Kazakhstani in the pair. They believe that Alexander has the best chance to win Wednesday's match.

Alexander had an excellent playing practice on grass before Wimbledon. The Kazakh played three tournaments. In Stuttgart, he beat Kudla but lost to Murray, in London, he was stronger than Musetti but weaker than Cilic, in Eastbourne, he knocked out Tiafoe and Millman but could not overcome Fritz. In the first round of Wimbledon, Alexander surprisingly easily dealt with the Hungarian Fucsovics in three sets. The match lasted only an hour and 24 minutes. Bublik won 6-1, 6-2, 6-4. During the game, Alexander scored 16 aces and five doubles, won 84% of points on the first serve and 45% on the second. We should note that Alexander was surprisingly good on the receive, where he had the following statistics: 44%/54%, with the ratio of winners and unforced errors 34/31. Though it is important to note that Fucsovics had a weak match, as evidenced by his 20/43 winners and unforced errors stats.

For Lajovic, the upcoming meeting will be only his third on the grass this season. Before Wimbledon, the Serb played one match in Mallorca, losing to German Altmaier in two sets. And in the first round, Dusan was somewhat fortunate as his rival, Carreño Busta, dropped the match after the second set at 1-1. It is not sure that the Balkan would have made it to the second round had Pablo been able to finish the match. The grass is not exactly Dusan's strong suit, and Lajovic hasn’t had a single positive grasscourt season in his career.

Bublik has a much better tone than Lajovic, plus Dusan isn't a grass player at all, while Alexander has repeatedly said that playing on such surfaces is his thing. Bublik's victory over Fucsovics was impressive, but the Hungarian was not ready for the tournament. For his part, Lajovic made it to the second round largely since Carreño was injured. We doubt that we would have seen the Serb in this round if the Spaniard had made it to the end of the match. We're betting on a solid victory of the Kazakh over the Serb, and we'd like to offer these odds for this match: