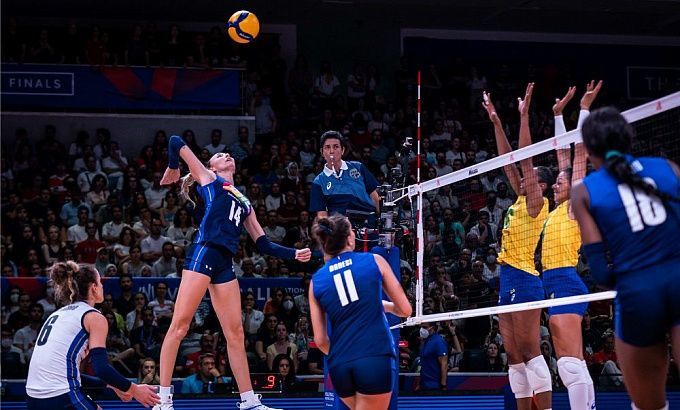 By beating Brazil twice in a row in the summer, and easily, the Italians have created a false impression that this will always be the case. We are sure that the Brazilians strongly disagree with this and will try to prove them wrong.

The Italians played fair the whole first group stage, i.e. they did not experiment with the line-up, respecting their opponents and spectators. Paola Egonu did not show up only for the match against very weak Kenya. The result was five wins in five games.

By the way, the star opposite is averaging 6.2 points per game, which gives us 24-25 points in a four-set game. Let's see what the bookies have to offer.

Mazzanti's women are all right with the blocks. For example, the Belgians were shut out 18 times in four games. In four group matches of five Danesi and her colleagues have set a double-digit number of blocks. On average Italian players put almost three and a half blocks in the set, being blocked exactly twice per set.

Before the duel in China, the Brazilian women had an average of 2,8 blocks per game, but in the mentioned game they could achieve nothing similar – only seven blocks in four sets. The average went down to 2.2. The number of blocks which the Brazilian women faced from their opponent increased up to 1,5 too, because Brazil lost to China 7-8.

But the Brazilian national team won the number of aces in four games out of five, which is an inaccessible result for Italy – the Italians are bad with aces in general. For example, Italy lost to the Puerto Ricans 0-6. They also lost to Belgium, and even to Kenya.

These teams haven't crossed paths in a thousand years, except in the Nations League, and before that in the Grand Prix. For this reason, it is difficult to draw a more or less realistic picture of their advantage in head-to-head encounters the Italians often played 18th team in the Nations League.

However, in the final of the last Nations League in July, both teams' lineups were very similar to today's – except Italy had Malinov passing, Egonu had a different hairstyle, and Brazil's Tainara was absent in the second zone. By the way, #19 of Brazilian team is not an opposite hitter at all, but she was playing great with China - 22 points, 19 of 36 of which she scored offensively.

But we'll finish talking about the Nations League final – 3-0 in favor of Italy, 7-4 in blocks, 2-3 in aces. Considering the way Tainara served against China, Brazil's advantage in terms of aces could be even stronger.

Bookmakers consider Italy an undisputable favorite, but Brazil has a bad standing in the group, sitting fifth. In order to have more or less worthy opponent in the playoffs without having to face Serbia or the USA in the quarterfinals, the Brazilians have to rise, so we expect a very tough fight from them. Here are the betting options for you to consider: