Serbia (W) vs Italy (W): bookmakers believe that the Serbs are likely to go home, but hat's debatable. 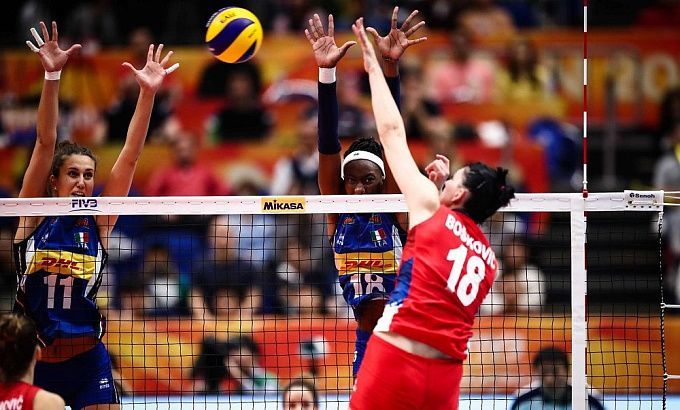 The last three matches between these teams have been very intense, as Serbia defeated Italy in every single one of them, stopping the Italians from becoming the World and European Champions. The Italians will try to retaliate, but it will not be easy.

The world champions have a simple strategy: receive, then pass the ball to Tijana Boskovic, who will deal with it. An example of this happened in the game with the Brazilian team, where she attacked 62 times, but still, the Serbian team lost with a score of 1-3. The other seven attackers shot 65 times in total. In general, the Serbian national team is basically Boskovic and her support team.

In the game against the Brazilians, Tijana scored 32 points, only two of which were not on an offensive play.

The Italian Opposite Paula Egonu is the second-best in Tokyo. After Boskovic, of course. To make the comparison of these two girls correct, let's take for example the match Italy - Turkey, which was also played in four games.

Egonu made 54 attacks in which she scored 26 points. She scored a total of 29 points in that game.

If you add up the points scored by Boskovic and Egonu in matches of the same length and against roughly equal opponents, you get 62. Bookmakers offer a combined total Boskovic - Egonu points over 51.5 at odds of 1.85. If the battle between Serbia and Italy does not end after three games, which is likely to do so, then these two beauties combined total points will probably be over 51.5.

Since Bianca Busch is at her best at the moment, scoring more than Brankica Mihajlovic, bookmakers consider the Italian team to be the favorite. That may be true, but the important thing is that the key players are in position. This means that once again we will have an exciting battle with lots of scored points. We should seriously consider betting on the performance of the two key players of the match, but first, we should bet on the victory of Serbia. These teams are equals, but the odds on the Serbians are much higher. Well, after all, the Serbs beat the Italians all the time. So, here's what I recommend betting on: