Market research firm HIS Markit says that in 2017 digital pay TV subscriptions around the world broke the 1 billion mark for the first time.

Digital pay TV subscriptions, including cable, satellite and IPTV, is growing despite the continued uptake of over-the-top (OTT) subscription video services, like Netflix, Hulu and Amazon Prime Video, which added more than three times the number of subscriptions than pay TV last year, according to IHS Markit.

Digital pay TV growth came largely from the Asia-Pacific region, which accounted for 83% of net additions, largely driven by IPTV growth in China. However, led by an increase in smartphone penetration and improvements in mobile data accessibility and affordability, there were three new OTT subscriptions for every new pay TV subscription in 2017 in the region.

Piracy remains one of the biggest challenges in the region with operators employing cloud delivery and advanced mobile enabled STBs as counter measures. HIS Markit warns that regulatory barriers and competition from maturing OTT sector pose a threat to future growth.

“We expect to see OTT subscriptions growing globally over the next five years, as Amazon and Netflix continue to invest in local and localized content, and as virtual pay TV operators start to appear and grow outside the US,” said Irina Kornilova, principal analyst of home entertainment, IHS Markit. 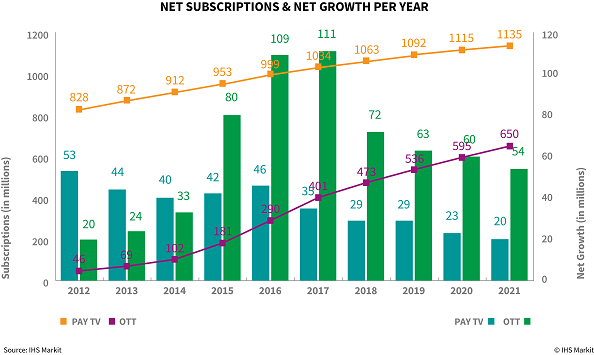