CIS Teams On The BLAST World Team Of The Year: Which CIS Players Will Get Nominations?

On Tuesday, December 14, the year's final tournament from the BLAST Premier organization began. The producers decided to hold their ceremony with different nominations to diversify their already extensive and varied production, calling the event World Team of The Year. What is curious about this fact for the CIS viewer? There is a favorite from the CIS region in every category. Thus, an unprecedented event may take place, with representatives from the CIS countries receiving all the "statuettes". 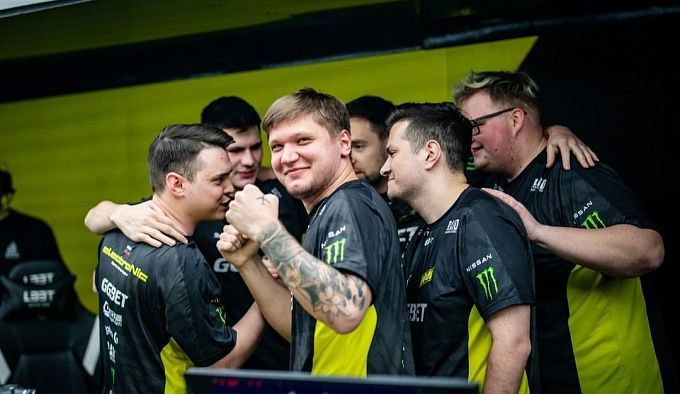 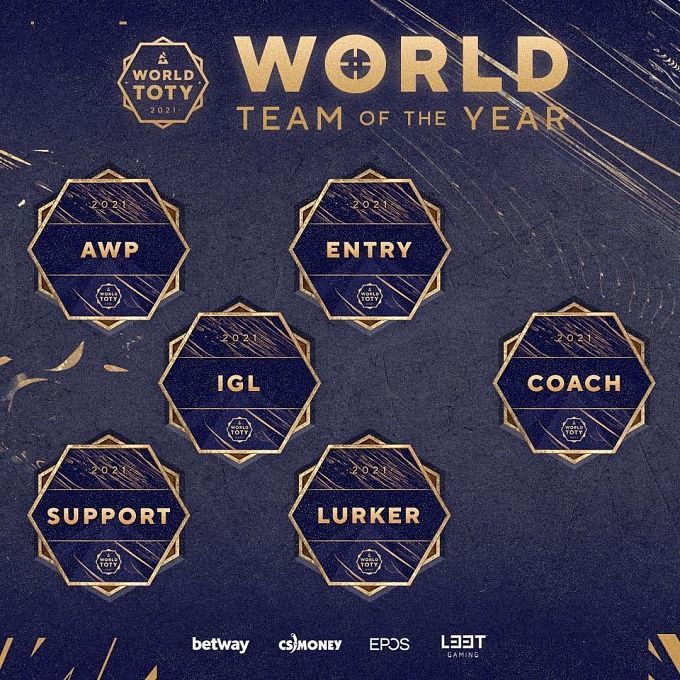 As you may have noticed, the essence of the award is to create a perfect lineup by selecting a player for each position. It remains an open question whether performances at all tournaments or exclusively under the auspices of the BLAST Premier will guide the jury. Let's have a look at each position separately! 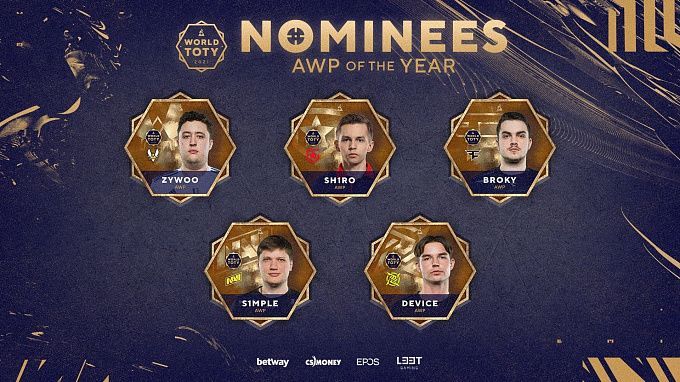 AWP is the main sniper.

Perhaps there are no better candidates for the main sniper of the year in modern Counter Strike: Global Offensive. BLAST Premier gathered all the best, among which stands out one figure Oleksandr Kostyliev, who knocked out his opponents with Natus Vincere at all major tournaments in 2021. There is no doubt that he will be in the lineup for the sniper role. But if the impossible happens, Gambit player sh1ro is the second main candidate. The best player of the last two years, a French player, ZyWoo, couldn't win a single tournament for 2021, and he is also without a single MVP medal, so he is only nominated due to his performance and his past results. Broky and device showed themselves well, in the top 5 since they are stronger than the other snipers but inferior to the before-mentioned three. 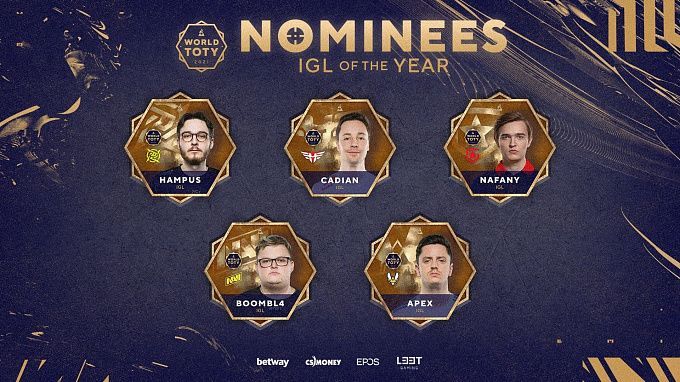 Everything is not as evident as in the previous nomination, as our guys are up against the most eccentric and loud leaders of their teams, not counting Humpus Poser (he is the main outsider here). It's a mystery which criteria the judges will choose, but if they rely more on in-game qualities, nafany and Boombl4 will win. In the era of coronavirus, in the first half of the year, Vladislav Gorshkov looked the apparent favorite for this award, then not so confidently performing on LAN, allowed to come close to his captain NaVi. Foreign analysts and ordinary users are more inclined to the win of nafany, as some believe Boombl4 is inseparable from the coach Andrey Gorodensky. But we should not forget how many tournaments Natus Vincere won and the performance of Kirill Mikhailov himself against Gambit Esports in the semi-finals of the PGL Major Stockholm, where on the Mirage map Boombl4 slaughtered his main rival. 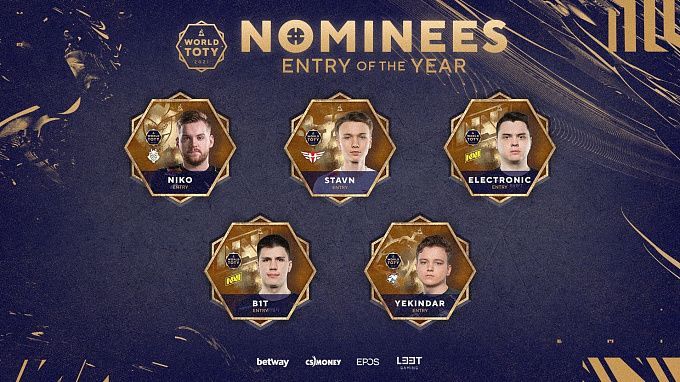 Entry or entry-fragger is the player making the first kill in the round.

Three representatives of the CIS teams, two players of the same organization, even the theory of probability is on the CIS side, but there is one BUT! It's Nikola Kovac. The main star of the finalists of the Majors will be a big rival to the CIS team. Let's remove the Danish team's top-fighter from the contenders and look at this clutch NiKo 1 vs 3. Valera B1T has the least chance to get the bonus because, according to the trivial statistics of the opening kills in the round, he has even less than stavn. Denis Sharipov is known for his aggressive style on Nuke or mid-Mirage, but his numbers are inferior to the other two contenders. Therefore, despite the numerical majority, there is a great reason to assume that a player other than Natus Vincere will get the award in this category. Nikola Kovac is a well-known name in CS:GO, it's a status, but the player who, indeed, has been troubling his opponents at the start of the rounds all year long is a representative of Virtus.Pro. Mareks has racked up 947 entry-frags with aggression, movement, and speed, the highest total in 2021. If we abstract away from NiKo's performance in general, the objective favorite is YEKINDAR. 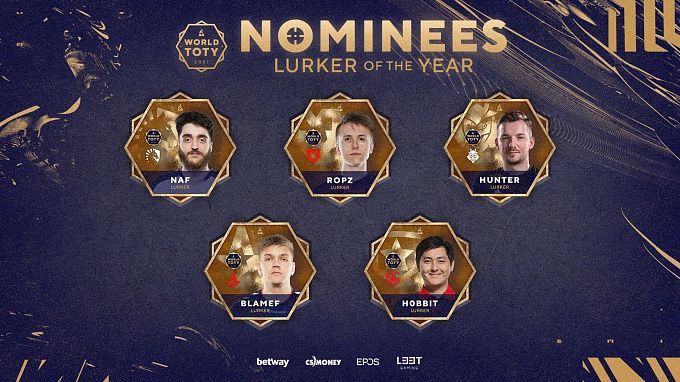 A lurker is a player who distracts opponents from the main action area by going into the back.

Let's face it, NAF, blameF, and ropz have no chance of winning due to their performances and the teams they represent. The main battle will be between the elder Kovac and Hobbit. It's hard to guess who will win the award in advance, but Abay Khasenov was brighter and more useful than his opponent in 2021 overall. He's a contender for the top 10 players of the year, so he might get the right to be called the main lurker. 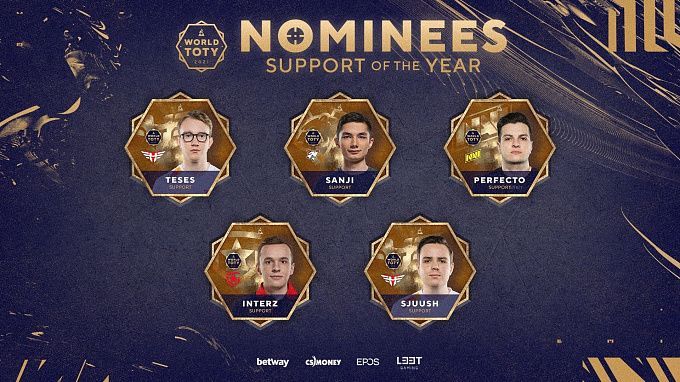 Support is a support player, a player in the ranks, often comes out in the exchange, playing in a bundle.

Amazing team Heroic is always close to triumph but regularly falls short of something at the last moment. Here again, two representatives of the organization are nominated, but the triumph of each of them is zero. The same goes for SANJI. The player had not the best year, culminating in his dismissal from the team. The fiercest battle will once again unfold between the cyber athletes from Gambit and NaVi. Here the intrigue is higher and more fundamental than in the confrontation between the captains of the organizations. In the CIS community and worldwide, the debate over who is better than Perfecto or interz has been going on all through 2021. For all the merits of Timofey Yakushin, his opponent has one important title, Ilya Zalutsky - the new Minister of Clutches in modern CS:GO. Perfecto is the world's premier single-round saves specialist right now, with his 1 vs 4, 1 vs 3 highlights frankly winning over viewers worldwide. All the big Natus Vincere triumphs in 2021 and his hugely impressive performances on the LAN are also in Ilya's favour. Interz is the benchmark holding midfielder, playing several goals above his rivals, but his main rival was brighter in the decisive moments. 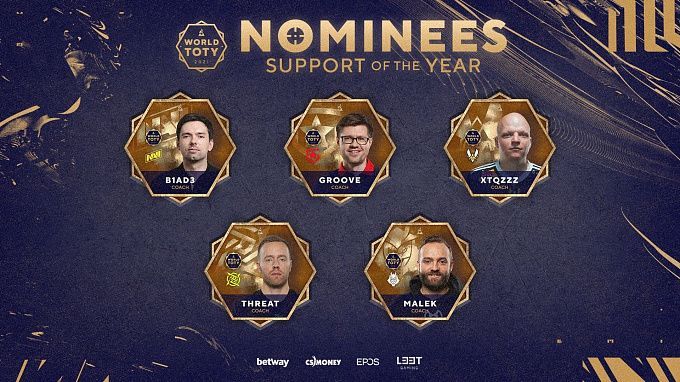 Rather than stirring up a debate about who can take the award, here's a quote from the famous CS analyst, Duncan Thorin Shields, a big sceptic of all things Natus Vincere:

"B1ad3 made Ukraine famous back in CS 1.6 by winning the first bronze medal at WCG with A-Gaming. Now he has won the first major for NAVI. In addition, he won trophies on LAN in Katowice and Cologne and the Intel Grand Slam. A new contender for the title of the best coach in history is on the way."

NaVi have won all the major trophies this year. Andrey Gorodensky's contribution to this is beyond doubt. His team's opponents in the nomination have been beaten several times each. Everything is obvious! 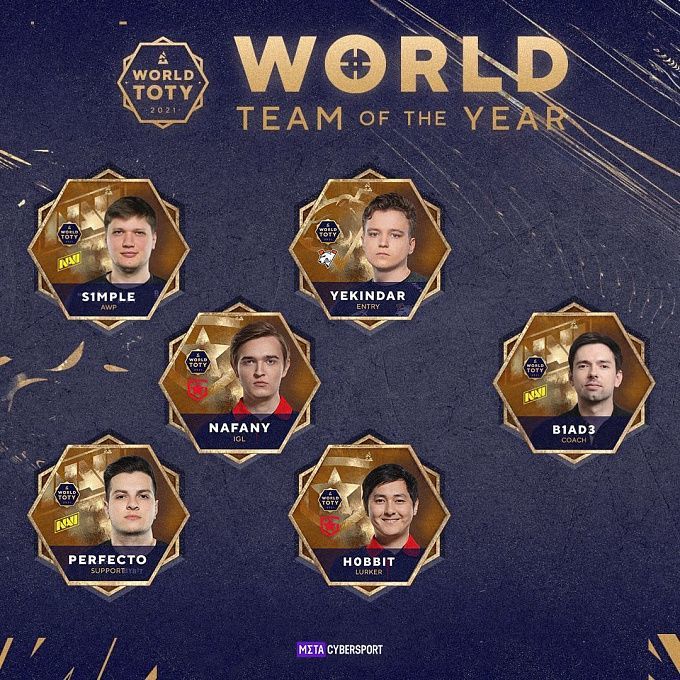 According to the CyberMeta version

Combining all of our predictions into one lineup, the Blast Premier team of the year should look like the following. We hope that our result will coincide with the final one!

The organization will announce the official results during the final tournament of the year BLAST Premier World Final 2021, where the CIS region will be represented by two teams - Natus Vincere and Gambit Esports. Let's wish the teams bring one more trophy to the treasury of an incredibly successful season for the CIS!

Bet on BLAST Premier World Final 2021
Tags:
Rating:
0
Comments
No Comments Yet! Be the first to share what you think!