Novak Djokovic vs Jannik Sinner Wimbledon 2022: How and where to watch online for free, 5 July

We are now steadily heading towards the Quarter-Finals of Wimbledon and this has been a fantastic season of tennis overall. There have been some huge upsets and this has been a strong period for the upcoming talent. Talking about the upcoming talent, Jannik Sinner will take on Novak Djokovic on 5 July. Novak Djokovic defeated Tim van Ritjhoven 6-2, 4-6, 6-1, 6-2. Meanwhile, Sinner defeated Carlos Alcaraz 6-1, 6-4, 6-7, 6-3. Novak looks in incredible touch and we have seen him dominate games after games, while Jannik also beat the odds in the last game by pulling off perhaps the most memorable performance of his career. This is an exciting game as Novak who is in the twilight of his career(Dare I say!) takes on an athlete who is the future of tennis. Can the future make a dent in the present?

How to Watch Novak Djokovic vs Jannik Sinner?

BBC has continued to showcase games for Wimbledon games in the United Kingdom. For those living in the USA, you can catch this tournament on ESPN. EuroSport has the major duty to broadcast games in the European nations. To those living in the Indian subcontinent, Star Sports is going to transmit the game. For the ones who love to stream, Hotstar is showing the game for Indian subcontinent viewers while Fubo, Sling TV, and Hulu TV have been doing so for global viewers. 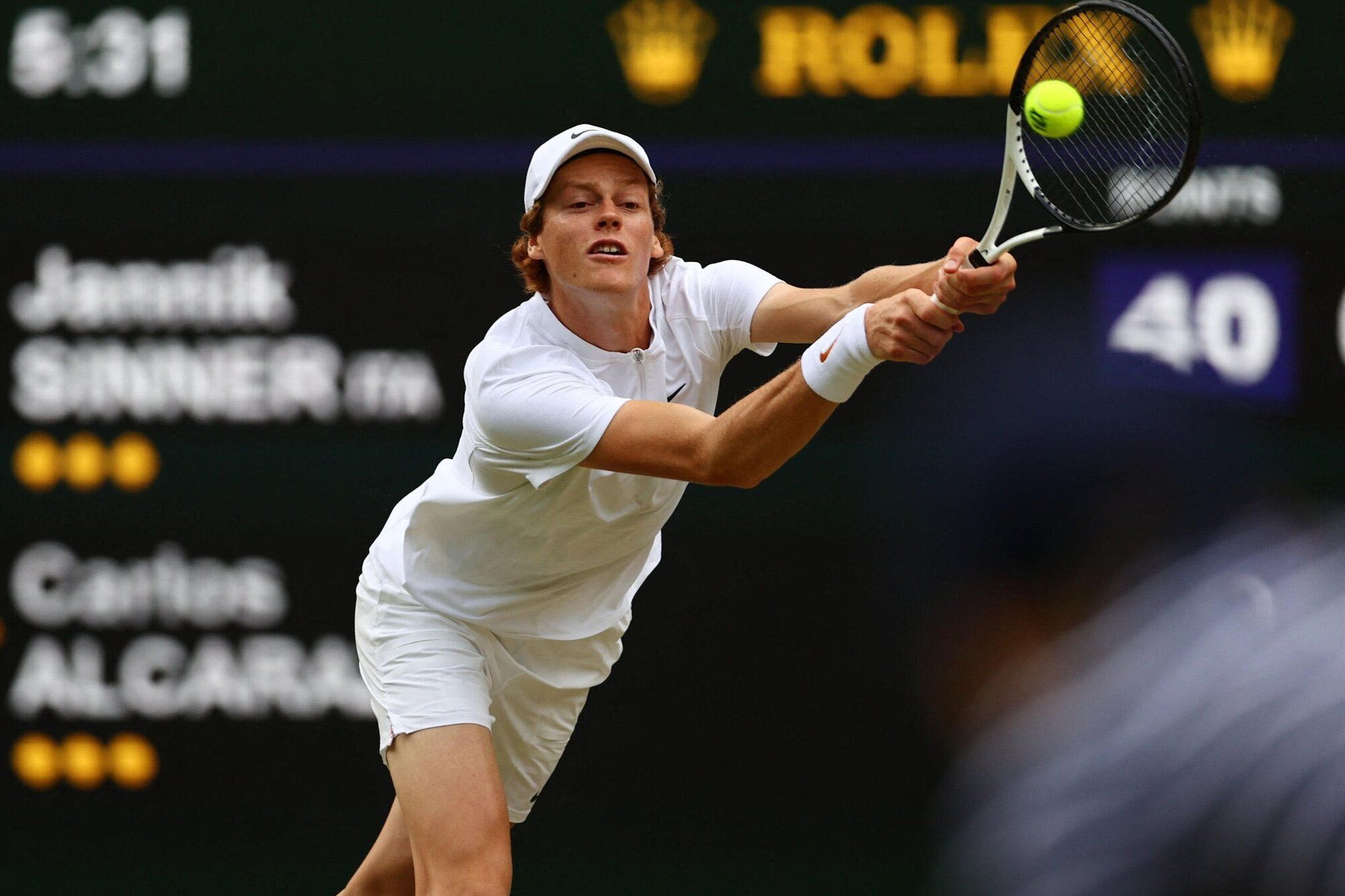 Sinner with a backhand

Novak Djokovic: In a groove

Djokovic got challenged by Tim whose acrobatic moves made Novak push on harder but once Novak gets it going, even the best of the opponents crumble. Djokovic began the game in the usual fashion, dominating the serve game and not committing errors but in the second set, he was taken aback by a surge from Tim. Still, Djokovic kept his wits and finished the business as he has done regularly against Tim who had nailed 20 Aces. Novak had an incredible 75% win on the first serve while continuously breaking Tim’s serve, earning a 56-26 receiving points advantage.

Novak’s service has been exceptional throughout the game. If you even take a set against him, he only becomes more dangerous in the subsequent period. He has stretched hard to break serves, he is running like he is 16 and the experienced player has continued to employ both backhand and forehand in an incredible manner. The Djokovic train is whistling past opponents and he looks primed for a championship.

Jannik wasn’t favored to win against Alcaraz whose relentless style suits the grass surface. However, Sinner was amazing against Carlos’ serve game. Jannik wasn’t as precise as Djokovic has been throughout the tournament but he has learned to scrap his way out and not give away momentum. The growth in his game has been stellar and he is becoming a great closer because of that.

Against Carlos, Sinner did a great job of breaking serve and eked out a 45-42 receiving points advantage and he didn’t allow his own serve to break, getting a 100-76 service points advantage. Jannik won seven games in a row at one point while not allowing Alcaraz to develop a winning streak. It was a truly remarkable effort from Jannik who has improved a lot this year.

Who will win the match between Jannik Sinner and Novak Djokovic?

Djokovic is especially ruthless against young players like Sinner and he will come in with a lot of confidence. Sinner’s game on grass still needs some fine-tuning despite his stellar run, and Novak isn’t a favorable match-up at all. Djokovic has played like the number one seeded player, losing just two sets in the four games so far, showcasing his full body of work. These two have met only once during the ATP 1000 Masters Monaco where Djokovic won 6-4, 6-2 on clay. History is likely to repeat here.

As per 1xBet, Sinner stands a low chance, if any, with the odds of 6.75. Djokovic’s odds are highly favorable at 1.135. Not a bit of surprise here.

No Djokovic match has gone to five games and we are usually in for a below 30 games affair. This is likely to be a contest like that unless Sinner has a surprise here. I’d lean towards betting under 34.5 games, which has the odds of 1.97.